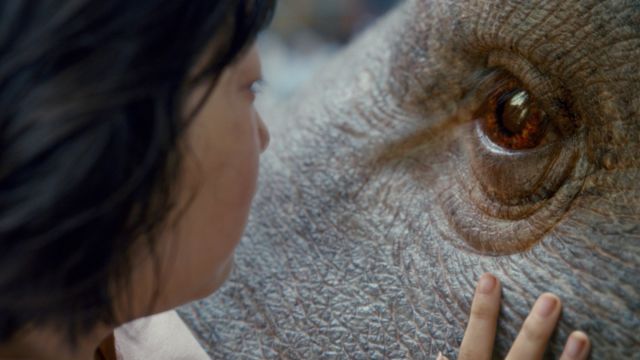 There's two wildly different stories at play in "Okja". The first story, the American one, deals with the cartoonish world of corporate agribusiness. The plot in that story is minimal- it's mainly just an excuse for loud imagery and louder performances. The second plot, the Korean one, is quite a bit more down to earth. It's the story of Mi-ja (played by Ahn Seo-hyun) and her pet super-pig Okja.

Their friendship is heartwarming. Our only context for it is an extended romp in the woods between the two best friends, but this is more than enough. Mi-ja's only friend in the whole wide world is Okja. They are best buds and will do anything for each other. So when Mi-ja runs into the elaborate carnival that is the corporate plotline, well, it's little surprise that she just plain doesn't care.

Neither did I. As a critic of Korean films, I'm often asked how they're different from American films. "Okja" provides a surprisingly on point side by side comparison. I care about Mi-ja because director Bong Joon-ho meticulously spends time making her an easily relatable, if one-dimensional character and Ahn Seo-hyun's performance really sells that. Whereas the American half of the story just sells annoying ad libs and unfocused political commentary.

There is definitely a place for comic relief in "Okja"- when it's subdued, as is the case with the Korean cast. Yoon Je-moon allows himself to be at the butt end of crude jokes. Choi Wooshik laughs at those jokes, brimming with endearing hostility toward the premise. Even Korean-American Steven Yeun has a great turn as a translator who tries and fails to be unimportant. These performances stand out because the actors in question work as part of an ensemble. They're trying to elevate the whole production- not just themselves.

Contrast that with Tilda Swinton, and the generally pointless subplot about her character's self-confidence issues. Jake Gyllenhaal's character could be cut entirely and no substance would be lost. Another character even explicitly states as much. As for Paul Dano, he's just too self-important. That could be read as ironic, given his character's egalitarian political beliefs, but his actions are portrayed as unambiguously heroic so...OK?

The physical spectacle of "Okja" is superb- Okja herself looks great and is convincingly rendered in all environments where she appears, even when, no, especially when the environment is being destroyed. The bright colors on display in the big parade look like something out of technicolor. There's even a nice setpiece in what would best be described as a monstrously horrific nightmarescape.

Ironically, I actually kind of wish there were fewer of these moments, so as to sharpen the emphasis. "Okja" is a perfectly good movie as is, but honestly, I would have liked it a lot more if it had only consisted of scenes where Mi-ja is physically nearby. The more quirky details I got, the less I cared about them. The backdrop works best when seen from from Mi-ja's point of view- as the bright and terrifying wonderland Mi-ja does her best to ignore, because she's only here to rescue her best friend.