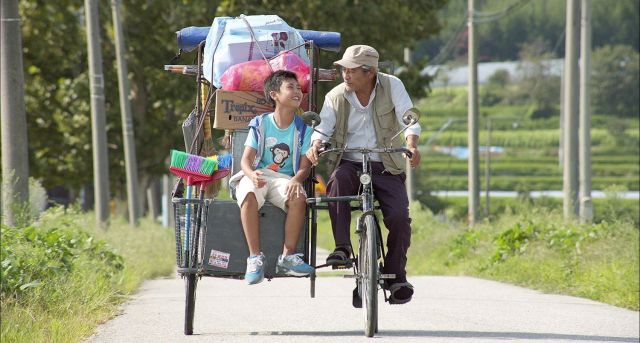 Kang-man (played by Choi Jong-won) is a cranky old man who rides his bike to the market everyday peddling random junk. In his spare time Kang-man drinks booze. Kang-man is obviously not appropriate guardian material for a young child but as it turns out his grandson Poong-do (played by Park Min-sang) doesn't have anyone to turn to. Also Poong-do is kind of a bratty sneak, which oddly enough makes him a good fit for his rather coarse grandfather.

"Old Bicycle" does not break any especially new ground when it comes to storytelling. Indeed, Kang-man himself is barely interested in Poong-do except through the vaguest sense of obligation. Their bonding is the practically accidental outcome of having to spend time together. This much is, oddly enough, fairly true to life. I had a grandfather who would refuse to make any advance plans to meet with family, yet he would never turn any of his relatives away from the door. That much was just a matter of his personality. You can't really get to know stubborn people used to face-to-face communication any other way.

But "Old Bicycle" isn't really a story at all- it's more ambience. The film was shot entirely in Buyeo- a somewhat obscure county in the South Chungcheong province that was once the seat of the Baekje Kingdom. This isn't your tourist friendly version of traditional Korean markets. There's aggressive haggling, the occasional fight, and most importantly of all, a great deal of glorious scenery.

We see this every time Kang-man gets on his bicycle. Director Moon Hee-toong really makes the countryside come alive, and it's all too easy to appreciate the colorful cast of characters who exist to live their own lives rather than complete plot points. "Old Bicycle" was originally a stage play, and the cinematography excellently coalesces with the character acting to build a snapshot of Korea separate from modern worries.

"Old Bicycle" is very much a conservative callback and romanticization of a Korean lifestyle which still persists to this day, even if it's not the kind of location that ever features much in English-language discussion of the peninsula. There's good reason for this- the characters featured in "Old Bicycle" are not the kind that speak in broken English, and they aren't terribly polite. This, however, is the entirity of their charm. Kang-man lives life the way he likes it, and why shouldn't he? Kang-man is an old man who got along fine without his grandson, even if he is glad to have had the chance to know Poong-do.

There is, truth be told, little of artistic merit in "Old Bicycle" for exactly the reasons discussed above. There's little in the way of plot, and the characters are rather uncomplicated. But this is all by design. What makes Buyeo a beautiful place is precisely that everything about it is so transparent. A Buddhist monk can appear out of nowhere, not to serve some sort of thematic point so much as because hey, this is an unpopulated part of Korea, and that's where the monks tend to hang out. Death in Buyeo is just a part of the natural cycle. While it may hurt, the constancy of this life is what helps us to move on.