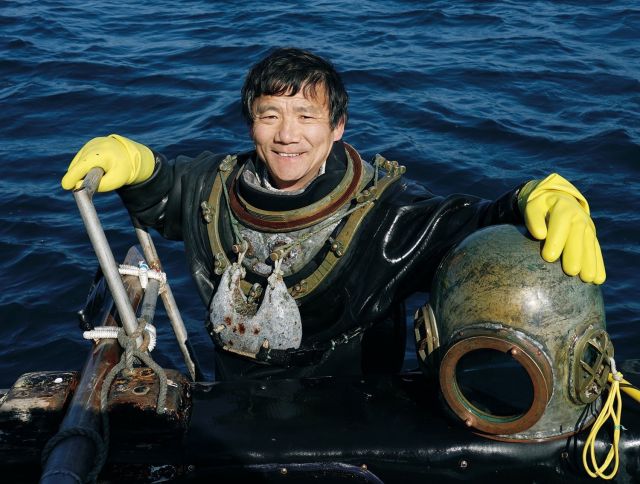 Park Myeong-ho defected from North Korea to South Korea some ten years ago along with his family, a wife and two sons. The reasons for why they defected are surprisingly mundane. My favorite is when he states that his dad spent forever in the military, and he spent forever in the military, but now his sons don't have to. He says that while doing his daily intensive calisthenics workout for the sake of his job- diving and catching underwater fauna, namely octopi, off the east coast of Gangwon province.

That is not the kind of work I would expect a defector to do, simply because it's so archaic. Nearly every other documentary I've ever seen about Korean deep-sea divers has made a point of emphasizing how this is a line of work that's dying out, because the people who do it are getting old and pollution has decreased the available supply of sea creatures to capture. "Old Marine Boy" features no such pessimism, as this documentary is oddly upbeat.

Most of this is due to Park Myeong-ho himself. The man is constantly content and satisfied with whatever he has, never even bothering to complain about how awful North Korea was by contrast. Then there's moments where he grumbles about how his family's status as defectors has put them at a disadvantage in South Korean society. Not because they suffer from discrimination or anything like that, but because they have no family there to petition for help when business is on the slow end.

Park Myeong-ho and his wife come off more like disaffected rural Koreans in general than they do ones who feel especially wronged by North Korea. Listening to Park Myeong-ho talk, he's kind of like that weird uncle you see around the holidays who has traveled the world in the military, church missions, a hot air balloon, something like that. Yet temperamentally, he acts no differently than you'd expect any random member of that generation to act.

Consider the scene where he goes off to vote, and it's not clear whether he even knows or cares about politics, Park Myeong-ho just thinks voting is a thing all South Korean people are supposed to do. His wife is just as hard to place. The main time we ever see her animated and excited is when she explains why she married her husband. I don't mean the story of why they met, I mean the story of how she considered him an ideal mate because he doesn't fight with her or drag her through unnecessary hardship.

Apparently defecting their entire family to South Korea doesn't count, since they have plentiful food and better quality television there. I'm not knocking their life choices or anything like that, it's just that "Old Marine Boy" is likely to be unsatisfying to anyone with dramatic ideas of the culture clash between North and South Korea. The "Old Marine Boy" himself is more quintessentially Korean than most Korean people I know in real life- which, is, admittedly, a pretty big social statement in and of itself.