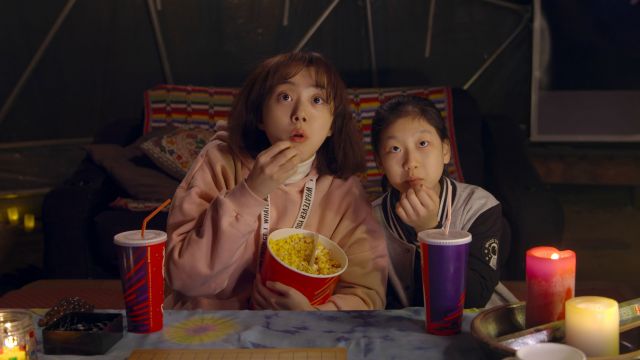 Ba-dook (played by Park Se-wan) is a former Go prodigy turned early twenty-something ronin, who has to make a living via odd part time jobs of various dignity levels. A chance encounter with An-kyeong (played by An Woo-yeon) leads Ba-dook to become interested in Gomoku, a simplified variant of Go where the objective is to get five stones of your color in a row. Gomoku is a more complex game than Ba-dook gives it credit for, and must train for her ultimate goal- a surprisingly good payout for second place.

"Omok Girl" is very low-key. Ba-dook as a protagonist is comically indifferent to nearly every strange thing that happens in her presence. For awhile I mistook An-kyeong as having an obvious crush on Ba-dook owing to his simultaneously creepy and giddy behavior around her. His long-term interest in An-kyeong is actually way weirder than that, but Ba-dook even shrugs off the dramatic revelation of An-kyeong's true form because that entire plot point is very, very silly.

That word encapsulates "Omok Girl" fairly well. One obvious goofy element is how all the characters have offbeat names that sound like immediately recognizable standard words. Ba-dook is the Korean word for Go. An-kyeong is the Korean word for eyeglasses. Yeong-nam (played by Lee Ji-won-I) is a preteen girl whose name means old man. The mysterious Gomoku master Ssang-sam (played by Kim Jung-young) means pair of threes.

Not that she's all that mysterious. We very quickly get an explanation for that ridiculous eyepatch that has nothing to do with Gomoku. Nothing in the training montage or flashbacks has anything to do with Gomoku either. All of the background material about the odd world that An-kyeong has invited Ba-dook into is mainly meant to emphasize how, even though Gomoku is generally thought of as a game for children, there are lots of adults who take it way too seriously.

This is all fairly funny in the web drama style of blunt jokes and visual gags. I liked how even though Ba-dook is ostensibly the protagonist she is inevitably the straight woman in almost every single scene, merely reacting to what the other characters say and do with the mostly logical emotions of indifference or frustration. Well, I guess she does get a pretty strong moment with the popcorn gag- although even that's just a logical extension of the overly dramatic way which another character has been revealing backstory.

While "Omok Girl" is not terribly ambitious I can't really fault writer/director Baek Seung-hwa for that. The movie isn't even an hour long and has to constantly resort to cheesy, low-tech special effects like turning off light switches. "Omok Girl" is so goofy that most of the jokes just call attention its own goofiness, and the ending doesn't even pretend to be a resolution. For all this the story does manage to be surprisingly relatable. I'd probably overemphasize silly jokes too if I was on a deadline with pitiful funding at stake, because it's pretty hard to do silly wrong.