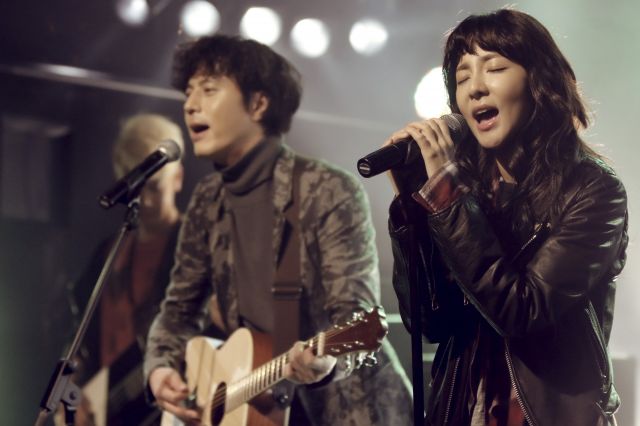 In the opening scene of "One Step", Si-hyeon (played by Sandara Park) is hit with tragedy, and wakes up an amnesiac with a bad physical reaction to music. So now she lives with aerobics instructor Ji-won (played by Hong Ah-reum). Together, they get the idea to piece together Si-hyeon's memories using her vague memory of a simple tune. That's when they enlist the help of writer's block hobbled songwriter turned name that tune radio guy Jee-yeol (played by Han Jae-suk).

Note that the story is not actually all that important. The conflict is never really solved. While we do eventually get some idea of what's in Si-yeon's memories, the movie manages to end without actually having a climactic moment where Si-yeon fully comes to terms with her past. There isn't even a romance in there- Si-yeon's relationship with Jee-yeol is entirely platonic, even if it doesn't always look that way.

So, you might be wondering, if "One Step" isn't about its own plot, what is it about? Mostly music. Despite her obvious handicap of being in horrible pain whenever music plays, Jee-yeol insists on trying to restore Si-hyeon's memories by having her listen to music. Over time Si-hyeon becomes accentuated to music, and learns to appreciate the strange colors she sees as being part of a consistent pattern, the flow of which can be redirected into pleasing music.

That's when Si-hyeon decides that she wants to be a musical performer in her own right and- all right, I'm sorry that so much of this review is plot summary, but that's a lot of why "One Step" is such an odd movie. It takes a really long time for the story to actually get to its own selling point. I thought the movie was a mystery, and it wasn't until the second half that I realized the entire plot was just a very elaborate excuse to have Jee-yeol give Si-hyeon (and us) a crash course in basic musical notation.

Once "One Step" finally gets to the music, the music is indeed pretty good. Maybe even good enough to be worth buying the soundtrack good. The problem is, having been promised a mystery that could be solved with music, I'm more than a little disappointed that director Juhn Jai-hong never actually solves the mystery with music. "One Step" feels more like the first couple of episodes of a high concept TV drama than it does a movie in its own right.

In all fairness that is what the title, at least, mostly implies. Si-hyeon does not solve every problem of her life- this is merely the first step to discovering who she is as a person. And that journey of self-discovery is something everyone goes through regardless of whether or not they are suffering from amnesia. In a sense Si-hyeon going from being terrified of music to loving the human camraderie it provides is pretty big character development, it just wasn't what I was expecting. Call that a nitpick if you want- it's not like "One Step" is explicitly all that bad, it's just not great either.