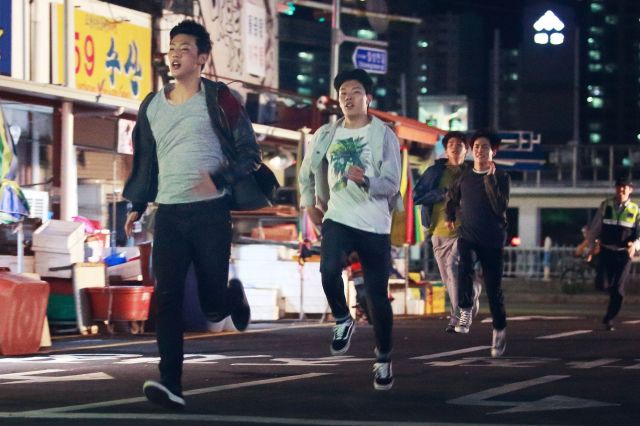 Yong-bi (played by Ji Soo), Sang-woo (played by Suho), Ji-gong (played by Ryu Jun-yeol), and Doo-man (played by Kim Hee-chan) are four friends on the cusp of adulthood. After some basic explanation establishing the situation of the four young men in life as well as their basic personalities, they set off on an adventure mostly for the sake of relieving stress. Leaving the confines of high school may be grounds for excitement, yet it is also an exercise in suddenly realizing the world is a dangerous place with tragic long term consequences.

If this summary sounds familiar, it's because there have been a lot of independent Korean films lately that have used this outline. "Mot" took a fantastically depressing approach to the idea of innocence lost, while "Speed" made the idea gross, gruesome, and lurid. "Su Saek" developed its narrative arc by making all the young men generally detestable people. So what gimmick does "One Way Trip" use?

That much is best summed up in a single phrase. They're good kids. Sang-woo loves his grandmother. Doo-man tries, however ineffectually, to fulfill his obligations. Ji-gong doesn't let himself feel too kicked down by his failures in life. Yong-bi can't stand by and just let bad things happen. While these aren't especially deep character traits, who has deep character traits at the end of high school anyway? Rather, what the young men in "One Way Trip" have is a sense of friendship and solidarity that's stretched to the absolute limit.

The main interesting thematic device in "One Way Trip" is that simply being a good kid with occasional rebellious impulses really isn't enough to make it in the world. While the overall genre mold in "One Way Trip" is that of the depressing independent film, a more commercial picture could easily be made with these characters, with the kind of feel-good happy ending that validates our sense of self. Because hey, we could have been characters in a movie, had we these opportunities!

But "One Way Trip" exposes these fantasies for exactly what they are- fantasies. We read in the news about some sort of injustice, hear about bystanders doing nothing, and feel outraged. We think that we could have done better, always conveiently forgetting that in the heat of the moment all humans, ourselves included, have less than perfect reasoning skills. What we do have are flaws and foibles that crack until the actions of a few minutes are enough to decide the ending to entire lifetimes.

That's the main tragic element which gives "One Way Trip" a lot of cathartic power where "Mot", "Speed", and "Su Saek" failed. These are the kinds of thoughts that come to mind when you see a person on screen who is clearly, without a doubt, a good kid who's trying to do better screw up. By the end I really just wanted to give the leading men in "One Way Trip" a big hug and tell them everything would be OK. But I couldn't, physically or mentally- and that's exactly the kind of emptiness a good sad film should be able to deliver.