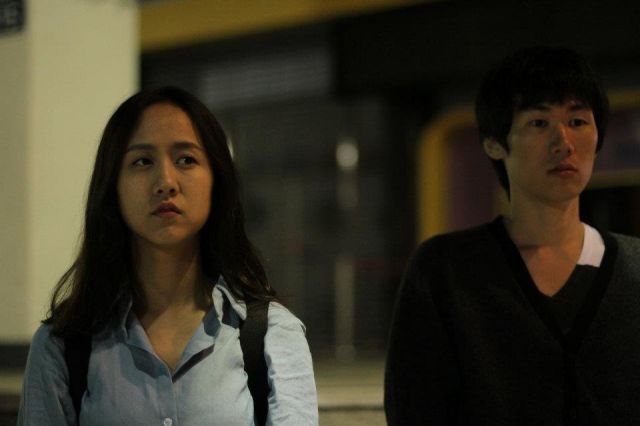 Director Kim Sang-suk here writes and produces a film about Sang-seok (also played by Kim Sang-suk) who dreams of untangling the mysteries of his personal life by writing and producing a film. I hope you like introspective irony, because if that sentence didn't clue you in, this is pretty much the whole raison d'être of "Ordinary Days - 2014". The movie even makes a specific point of trying to confuse us about which scenes feature Sang-seok the director and which ones feature Sang-seok the actual person.

Meta-discussion of film is nothing new. What makes "Ordinary Days - 2014" interesting is mainly that it recognizes that this meta-discussion is limited largely to the people who actually make and comment upon the films themselves. We can't separate Sang-seok's chosen means of expression with who he is as a person.And as a person, Sang-seok is entranced by the ability of even a cheap, low-budget film to possibly shine a light on universal personal truths.

The format also happens to be conveniently passive-aggressive. Consider the story from the perspective of Mi-so (played by Kim Eun-joo-II). As far as she knows, all there really is to the story here is that Sang-seok is using personal life experiences to create a film that might be decent enough to get them all some recognition. Obviously Mi-so realizes that he's up to something- but in the name of art, she's willing to play along. And there's no aha moment where we clearly see that she's figured it out. The process was a continuous one.

For what it's worth maybe it actually is art. Think about it. Sang-seok and Mi-so are both tapping into their actual real emotions as people in order to create a better performance on camera. Weirdly, the main obvious difference between their true selves and the performers is that Sang-seok and Miso have much better dialogue when they're in front of the camera. Note that the crew rarely ever appears until the scene is actually over- heightening the sense of general mystique.

In many ways "Ordinary Days - 2014" is interesting mainly as a psychological document. It exposes the people who create films, not as genius auteurs trying to craft the perfect story, but as somewhat socially awkward people who can't communicate serious ideas any other way. Ironically, the characters have no trouble whatsoever goofing off and clowning around. All of the characters are reasonably close friends, or at least are good at acting personable. They're not that much different than anyone else. It's just, they hapeen to be making a film right now.

It's this down-to-earth quality that prevents "Ordinary Days - 2014" from sliding too deep into pretension. The result is a fairly enjoyable introspective, honest piece about the social ambiguities created by the camera. Even by the end, when Sang-seok and Mi-so appear to have transcended film into the real world, it's like the (Korean) title says. 'Twas nothing special. And I suppose in a way they're right. These people are just making film after all. It was a lark that was good for a laugh, and maybe to get a broader perspective of the bigger world they live in.