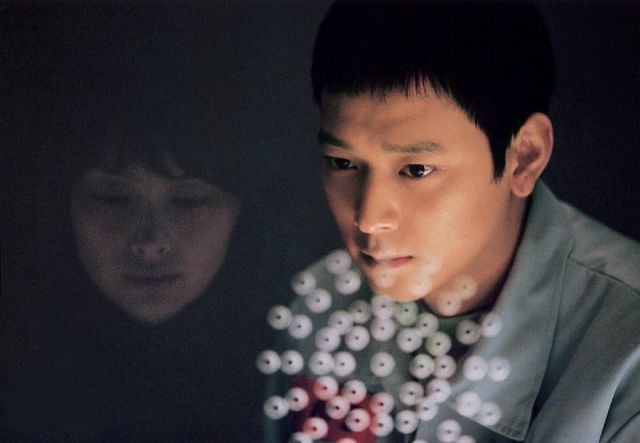 Yoo-jeong (played by Lee Na-young) chronically attempts to commit suicide mostly out of spite. While suicidal people generally act in such a way because they believe the world would be better off without them, Yoo-jeong holds no such illusions. Her self-inflicted wounds are not a cry for help, but a deliberate sensation reminding the woman that there is no hope, love, or genuine empathy in her life. There is only pain, and Yoo-jeong has been brought up in such a way that viciousness is about the only form of communication she can register as being valid.

Condemned prisoner Yoon-soo (played by Gang Dong-won) has about as bleak an outlook as Yoo-jeong does. It's this curious sense of mutual loathing that brings the two together, after she becomes witness to a painful emotional scene that appears to have come straight from Yoon-soo's nightmares. The sentiment in the room is simply eviscerating. Three observers watching two people have a moment- well, four observers, actually. Counting the viewer.

"Our Happy Time" builds its sense of emotional resonance by forcing the viewer into that awkward realization that we are seeing a person at their very worst, in their darkest hour and- well, that's it really. There's no magical solutions. Yoo-jeong does not escape her past trauma, and Yoon-soo does not escape the inevitability of his criminal punishment. And yet because we're able to see these people, to see them as something besides the angry balls of hate they've curled into at the start of the film, it's that much more difficult to think that they've gotten what they deserve. Even if in a technical sense that is what's happened.

This would almost be a religious movie except that neither of our leads appear to have much respect for the Christian faith. The doctrine is never gone over in much detail, even though one of the characters is a nun. All we're left with are very broad strokes of the idea of forgiveness, and releasing hatred from the soul. And maybe that's not good enough to solve everything. It's still enough for some people to find joy in the moment.

And yet Yoon-soo's fate is inevitable. There's no sense of joy or peace in his final moments- just the weak pathetic cries of a man who's terrified out of his mind and now we, once again, will watch him at his most intimate moment regardless of whether or not he consents. Love is all that matters in that wretched moment, and that's because love is all that's left to give when the material world is fading away.

It's all terribly cruel. "Our Happy Time" could easily be read as a treatise against the death penalty- the film certainly makes a good case that no one should be treated as a monster, even if they've done monstrous things. But then, even if the system is contributing, ultimately Yoo-jeong and Yoon-soo are creating their own demons. When they're so fully in the depths of destroying their own sense of spirit, it's hard to imagine why the rest of us should be helping them along. This empathetic message is at the core of "Our Happy Time". And it is sad, it does provoke tears. All of this, though, is to remind us what it means to be human, and more importantly, see that others are human, too.

"Our Happy Time" is directed by Song Hae-seong from a novel by Gong Ji-young and features Gang Dong-won and Lee Na-young.

"Our Happy Time" is also known as "Maundy Thursday"

DVD Giveaway open to everybody