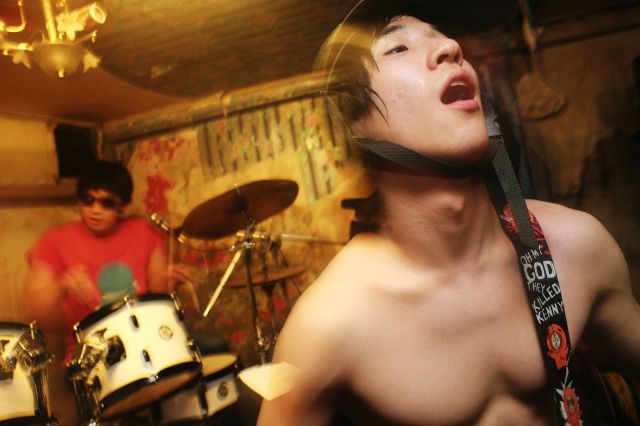 Once, long ago, independent musicians in Hongdae wanted to do performances. They were frustrated in these matters by their inability to find an appropriate venue. Then they discover a small mom-and-pop operation, and managed to turn that into a sort of music club. Then the city intervenes and attempts to take over the property for the sake of tearing the building down and replacing it with something more obviously appropriate for the public good. "Party 51" is about the struggle of the local musicians and the property owners to maintain the cultural space they've created.

When "Party 51" first premiered at the Jeonju International Film Festival last year under the title "51+" I wasn't particularly impressed. The story outlined above is a fairly straightforward one, but for the most part it's extremely difficult to keep track of all the various different people flitting in and out of the protest. There's no in-depth legal information either, so the narrative of the procedural battle is also a fairly indirect one.

Upon recent rewatch, though, I was surprised at how much I liked the movie. The change isn't so much in the design (although this cut does differ somewhat), as it is in my personal appreciation of the documentary form. Despite the trappings alluded to above, "Party 51" isn't really a story so much as it is ambience. We're just watching a big group of dudes doing their best to rock out.

Now, technically speaking, if you want to watch a bunch of dudes rock out going to an actual independent music club would probably be the best way to do it. But again, "Party 51" is literally a documentary about the destruction of one such club. Director Jung Yong-taek does an excellent job capturing why it is that all these people are working so hard to keep this place open- as much as we see the struggle of trying to prevent the demolition, there are just as many scenes of musicians using this whole legal crisis as an excuse to give out a last hurrah of music.

It's not really a mesh of tone that works all that well, as is aptly demonstrated in one scene where another similarly oppressed group sits in solidarity for a performance. They cover their ears, as this isn't music to them, but rather just noise. While the band of musical misfits is normally intended to be an inspiring trope, here it mainly establishes the fact that there really isn't any way for these people to get any kind of acceptance in traditional venues. And that's OK, everyone's entitled to their opinion. It's just, are mainstream construction projects really so important that they should stamp out fringe cultures?

"Party 51" is a failure in the traditional terms of the documentary format. However, it's quite possibly one of the best looks you can get at the independent music scene in Hongdae short of actually going to the trouble of finding an in-person performance. Even then, though, this isn't really an educational film. It's watching people have fun even in an obviously bad situation. Inevitable ending notwithstanding, this is a fairly uplifting point of view to take. Come what may, the party goes on.

"Party 51" is directed by Jung Yong-taek.