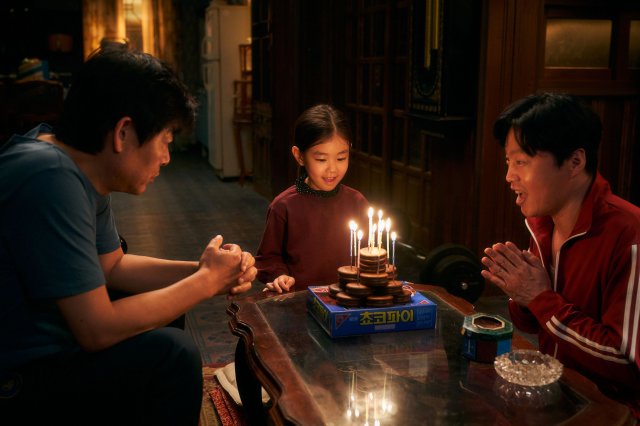 When we're first introduced to Doo-seok (played by Sung Dong-il) and Jong-bae (played by Kim Hee-won), the men give off a vaguely sinister vibe. They dress like gangsters, such that Doo-seok rather nastily castigates Jong-bae for wearing a gold chain that makes him look rather more thuggish than his semi-respectable job title should imply. Then Doo-seok busts into a convenience store to get something to drink. Yet in spite of his rude demeanor, Doo-seok keeps calling out for someone to come take his money.

While Doo-seok's a bit a bit of a thoughtless jerk, he still puts in the bare minimum effort to try and be a good person. This is meant to be reassuring when he kidnaps Seung-i (played by Park So-yi) to bully her illegal immigrant mother (played by Kim Yunjin) into paying off her debt. Seung-i is vicious yet adorable, though "Pawn" glazes over this transition in her relationship with Doo-seok in the name of unapologetic sentimentality.

Other factors that "Pawn" glazes over are how the lives of our three protagonists progress until the adult Seung-gi is played by Ha Ji-won in the present day. Doo-seok and Jong-bae get into a new line of work. Seung-gi eventually gets really into Chinese translation. It's unclear how much of this has to do with her mother. And in the most egregious case of shortchanged editing, a character played by Jang Myung-kap receives no dialog in spite of being rather obvious critical importance to the plot.

But then, this movie is really more about cuteness than plot. Take the movie's title, which also doubles as a somewhat insulting nickname for Seung-gi. Doo-seok barks it out with deliberate cruelty at the beginning of the movie, then it slowly turns into a term of endearment, in spite of still sounding completely ridiculous. I don't envy the English translator who must make the concept of debt collateral into something that kind of sounds like a real name to the point it can double as a plausible portmanteau.

Aside from the messaging about nontraditional families "Pawn" is also a fairly strong period piece. Sung Dong-il is in many ways reprising the same basic character type he became famous for in the Answer Me dramas. The local environment of Incheon's Chinatown is similarly quaint. That convenience store I mentioned at the beginning of the review is very much in the olde time style of a weird little hole in the wall with coke and choco pies lined up in random places. There's nothing all that convenient about it, not that Doo-seok minds. He always pays his debts.

That aspect of his character came off a little awkwardly in the darker parts of the movie that get into human trafficking. "Pawn" is all over the place when it comes to that kind of stuff. Nevertheless, the movie excels on strong chemistry between the principal actors. It's the kind of movie that can make a person cry, even when particular plot points are foreshadowed with decided unsubtlety. Worry not though- you'll get your happyish ending eventually.