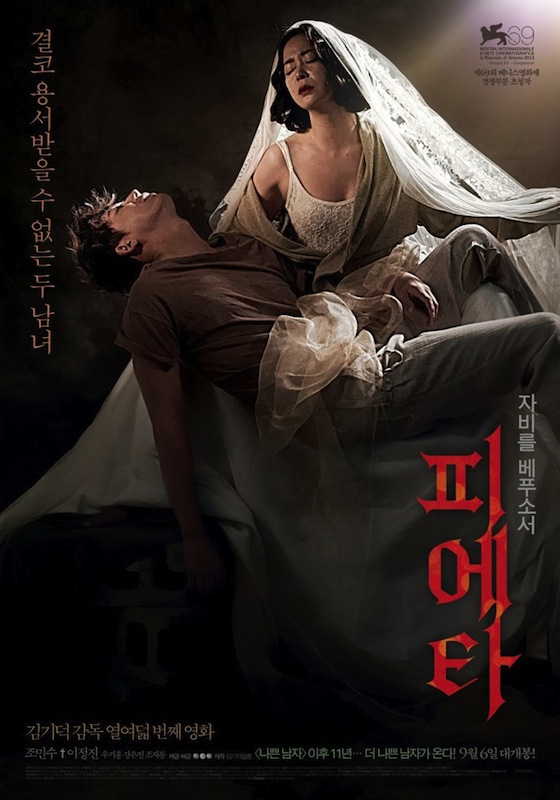 I remember walking through the streets of Cheonggyecheon, the claustrophobic and sun-starved alleys seemed like a grubby labyrinth forgotten in time. Although the area was bombarded with a $900 million urban renewal project, the grit and significance of the district will not as quickly be forgotten. If you care to venture a little further in, past the new statues, restaurants, up the stream as far as your legs will take you, you will slowly begin to hear the sound of metal, machines, and the madness that still haunts Korea's capital.

It is here where Kim Ki-duk has dragged us in his 18th film "Pieta", a savagely visceral experience with morals as twisted as metal being shaped. In Kim's film it is home to the desperate and needy, the forgotten and helpless, families and broken men. Our gaze pivots around a cold-hearted loan shark (Lee Jung-jin), a devil of a man who performs the miracle of collection debt from those who have little and less. It not so much act of divine intervention, as it is a grizzly and animalistic crippling of lives and futures. It is a shadow of a world where desperate men sink deeper, fall, and walk away on crutches but pockets full of currency.

The film's opening scene shatters any illusion about the disturbing nature of the spectacle. A crippled man sits in a workshop lot as we watch him lower a chain into his lap. He wraps it around his neck and presses the button again, this time raising the chain and himself as his life is taken. He becomes free from his wheelchair, from his lame legs, from the world he has given everything and more in service for. This depressing suicide is then juxtapositioned with a younger man, similar in features, waking up and pleasuring himself under the blankets as he confronts the morning light. The two images are disturbing enough in isolation, but Kim synthesises the two as the spectator is forced to take pleasure in the autoerotic asphyxiation that emerges in the void between them. Hold on tight, and maybe hold you breath, because this Kim's dreamscape here is nightmarish, cold, and condemning.

The depiction of loan sharks in Korean cinema is a common and saturated motif that is often glossed-over in formulaic comedies and dramas. Here though, Kim places it on rigged and rusty scales as flesh and future is measured in commas and zeros. As our ghost of man goes around 'collecting' debt and breaking men through the tight streets, he in turned is stalked by a mysterious woman who claims to be his mother (Jo Min-soo). She is ghost of sorts herself whose perturbing quest to love this emotionally crippled are meet with denial, beatings, rape, and a unconditional love that exits so far beyond the confinement of the frame that it can't be anything be real and true.

"Pieta" values the rituals and rebirth over the illusions of stability that haunts this world. Our shark visits men on his list like death on duty, but instead of enacting the humane gesture of taking their lives, he takes their humanity instead; breaking bones and butchering them like a lost horse of the apocalypse trapped in the minotaur's den. As part of this ritual, live animals are claimed and consumed, the gifts and spoils of war that nurture. A chicken, a eel, a rabbit, and, in one ambiguous and twisted scene, parts of our shark are digested in service of a truth that Kim dances around to the drum of his erratic re-framings and crash-zooms.

The visual nature of this bloody alter is captured through the guise of a rather atypical camera work of Kim's films. Close-frames lock you in to this inescapable nightmare, with sharp, short and unexpected zooms pushing you in, as if marking the viewer's own apprehension in engaging any further with this world of money and broken men. In once scene we find ourselves looking at mother as she watches her son take a beating. The camera jolts with each slap the man receives, further felt through the tears and distress on the helpless mother's face as she watches her son struggle in the very world she brought him into. Similarly, and in perhaps one of the films most controversial scenes, our shark forces himself on the mysterious woman claiming to be his mother, places his hand up her dress and asks: "I came out of here? Can I go back in?" It's a twisted Oedipal realisation that, absent the father, terrifies and tears into our imagination with such force that many will find to encroach on the boundaries of their cinematic sensibilities.

"Pieta" won the "Golden Lion" award at the 69th Venice International Film Festival, in the process becoming the first Korean film to do so. After Kim Ki-duk's own personal "Night of the World" found in his 2011 return to cinema in "ARIRANG - Movie", "Pieta" is an invigorating return of one of Korea's most influential and acclaimed directors. His efforts largely exist outside of Korea's mainstream industry as he continues to manipulate the medium to whim and will of existential crisis and being; exploring matters that compound our understanding of life with a deathly simplicity that probes deeper and deeper into the crevasse of our minds. Showing us exacting what he finds there, whether we want to know of it or not.