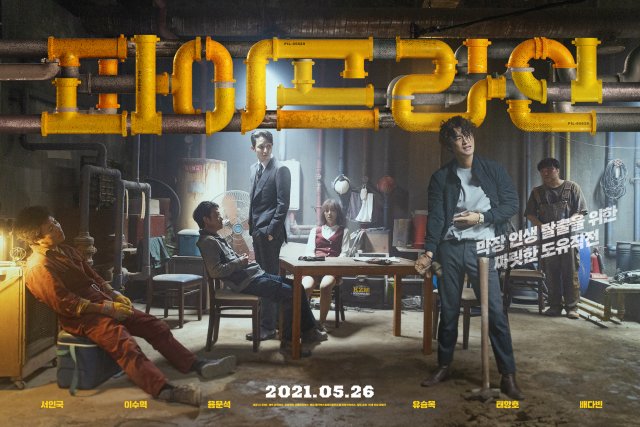 The opening sequence of "Pipeline" shows tremendous promise. We see the goofy looking Birdie (played by Eum Moon-suk) swagger his way to work, strip down to his surprisingly buff bare chest, and exert the utmost confidence in jerking the relevant equipment to release that sweet, sweet oily substance out of the gigantic pipe into its snug receptacle. Then something goes horribly wrong, because Birdie isn't the main character and also my sexual innuendo kind of falls apart because "Pipeline" did not have as many bare chested men as I was expecting after that first scene.

It's an apt metaphor for how "Pipeline" works as a movie overall. There are some genuinely really good ideas here, all of which center around the movie's unusual premise. Oil is critical to our daily lives. It's valuable. But we know almost nothing about how it works. Our actual main character Pindolli (played by Seo In-guk) is able to make the big bucks because he gets the nuances of jacking into pipelines and stealing the oil, and the explanations for his convoluted schemes are genuinely riveting.

Even better are the moments where Pindolli and his crew have to improvise, because they're running a pretty crude operation and are not terribly competent. There are lots of small technical problems with running an illegal oil siphoning scheme. The most obvious one is that drilling all those holes makes a lot of noise. It's also filthy. And Pindolli doesn't really know most of his crew, and also none of them really like each other that much.

Unfortunately the innovative situation comedy prompted by such a set-up is mostly ignored as the movie goes on to instead build up a considerably less interesting conflict with Geon-woo (played by Lee Soo-hyuk) who is bankrolling the operation and is a genuinely terrible boss. I don't mean that he's an evil boss, although he's that too. I mean that Geon-woo oversees the job in such a way that his attempts at management consistently just make the job much harder at no benefit to anyone, not even Geon-woo, who after a certain point is just picking fights with Pindolli for no reason.

I was disappointed that young cop Man-sik (played by Yoo Ba-ram) wasn't the real antagonist. He had much better potential for farce, as Man-sik is quickly established as knowing a lot about drilling, not being respected by his superiors, and being too much of a nice guy to investigate as aggressively as he should. Scenes with Man-sik play off as social comedy, while Geon-woo is so aggressively nastily evil he constantly drags "Pipeline" away from its essentially comedic foundations into needlessly epic territory.

At the end of the day Pindolli's band of ragtag petty criminals who aspire to one day be moderately important criminals just aren't particularly heroic. Their confrontations with Geon-woo's criminal mob aren't convincing, and worse, take away precious time from a unique premise that should be reveling in its weird technical details. "Pipeline" is just a big disappointment all around.