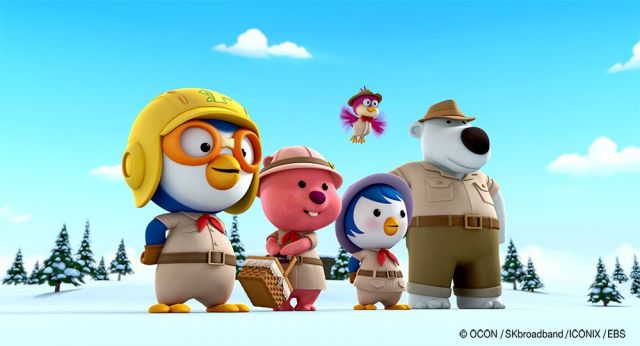 So apparently in the world of the lovable little penguin Pororo (voiced by Lee Sun), there is a dinosaur island. On its face this isn't really surprising, since Pororo's best buddy Krong (voiced by Lee Mi-ja) is a dinosaur, whose origin has never been explained. Alas, those of you hoping that "Pororo, Dinosaur Island Adventure" would be Krong's origin story will be disappointed. Although Krong has (presumably) never seen other dinosaurs before, the existence of an entire dinosaur kingdom passes without commentary.

Further confusing the issue, the dinosaur kingdom is family-friendly in design. The only apparent analog to a Tyrannosaurus Rex is a benevolent ruler with human styled body proportions. Yet when genius tech fox Eddy (voiced by Ham Soo-jeong) builds a holographic dinosaur world, the Tyrannosaurus Rex equivalent there is a giant murderous looking beast. Could it be that in the world of Pororo, there are several different dinosaur nations each embodying different archetypes?

But then the planet on which Pororo and friends live is singularly unique. Apparently. The villain of "Pororo, Dinosaur Island Adventure", Mr. Wai (voiced by Um Sang-hyun) is, we are led to believe, an intergalactic dinosaur hunter. Except we then discover that Pororo and all his friends also have attached bounties. The implication, then, is that all life on Pororo's world fetches a high price at intergalactic zoos. Which I assume is where Mr. Wai is taking them. It's not made very clear.

And why is that? Because "Pororo, Dinosaur Island Adventure" is an animated movie intended for small children and it is probably a sign of mild mental illness on my part that I keep examining the worldbuilding as if it is anything more than an excuse for Pororo and friends have adventures with dinosaurs. Aside from being generally unexplained, the backstory in "Pororo, Dinosaur Island Adventure" never gets anywhere near as morbid as, say, "Super Bernard: Spy Adventures" and its casual discussion of genocide committed both by and against polar bears.

In broader strokes that's just the only interesting part of this movie to really discuss because the story's so basic. Dinosaurs are kidnapped. Pororo's friends are kidnapped. So the dinosaurs and Pororo's other friends have to work together to save everyone. Note that Eddy, as a scientific genius, is of far greater use to the operation than literally every other character put together, considering that an integral part of the plan involves taking over a massive spaceship and its army of robots.

Even basic dramatic tension is weak- the outcome of a big fight with a single giant robot is predestined to be pointless, since we already know there are lots more giant robots who are a little late to the fight for some reason. But then, why fight robots, when our heroes can engage in slapstick routines with them, where the normally threatening mechanical monstrosities just behave like big silly goofs? In that sense their ultimate fate is justice incarnate- an endless dancing conga through the vast emptiness of space. I would expect nothing less from a Pororo film.