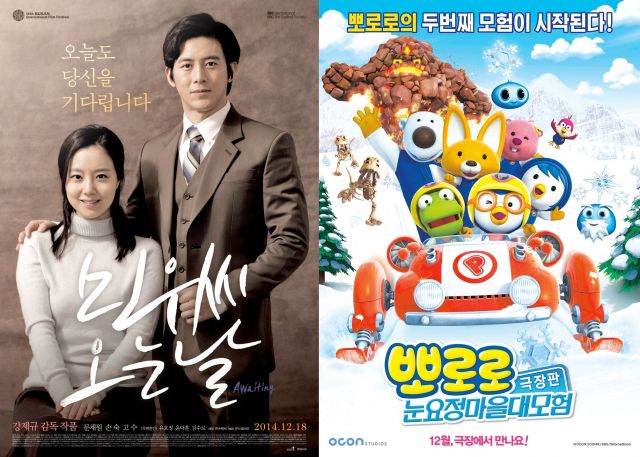 This holiday season marks the release of two unusually short films in Korean theaters. Both are worth your time, albeit for very different reasons. First up is "Pororo, The Snow Fairy Village Adventure". As the titles implies, the lovable penguin goes off with his friends to a snow fairy village to have an adventure. Yes, this is obviously a cartoon intended for children. If you're one of those humorless folks who hates anything not intended to directly please superior adult brains only just skip the next couple of paragraphs.

For the rest of you, the cartoon's a lot of fun. The story is extremely simple, and the narrative goes along just quickly enough to set up the next pretty setpiece. While Pororo's adventures are typically small in scale, this version does everything it can to showcase the beauty and majesty of winter beyond what's usually possible on the small screen. As the characters gape and awe so too does the audience at how everything looks, well, kind of magical.

And yet while this crazy adventure culminates in a big high stakes fight, the short film never loses the charm that's made Pororo such a popular household name. I particularly like the introduction of the villain. He's just kind of chilling out enjoying himself at home. Not literally, though. Literally chilling out makes him angry. Visual verions of that kind of simple joke abound here- cute enough to warrant a smile from adults, bright and fun enough to make the kids happy.

Now, for the more serious offering. Yeon-hee (played by Moon Chae-won) is waiting for her husband to come home. That day is a long time coming, and yet for the most part Yeon-hee's routine has remained unchanged. Her soft narration walks us through the steps of her everday life. Yeon-hee may seem lonely, but she survives. Such is the power of faith and love. Even as we wait thirty minutes for "Awaiting" to reach its inevitable conclusion, it eventually becomes all too clear that Yeon-hee has been waiting far longer than that.

There isn't really that much to write about this film- "Awaiting" is so beautiful and understated in its exploration of the virtue of patience that this is really all you need to know about it. Certainly, director Kang Je-gyu deserves credit for excellent design work. The vision of Korea he creates here is a fusion of both old and new lifetyles. While technically a twist, the revelation regarding Yeon-hee's character is really just a long time coming. Her actions really do befit an elegance coming from another era.

And on that note, Moon Chae-won deserves much praise for her performance as the woman who makes a lifetime of waiting feel like an instant. She really inhabits the role here. All of the cast and crew, really, show an intense understanding of admirable fortitude in the face of despair- hoping for the best even in the face of low expectations. In this way "Awaiting" gives a truly excellent look at nobility in the face of the endless sands of time. A bit deep, perhaps, for the younger audience. But hey, give them a little Pororo first and they'll probably be in a good enough mood to give anything a try.

"Awaiting" is directed by Kang Je-gyu and features Moon Chae-won and Go Soo.