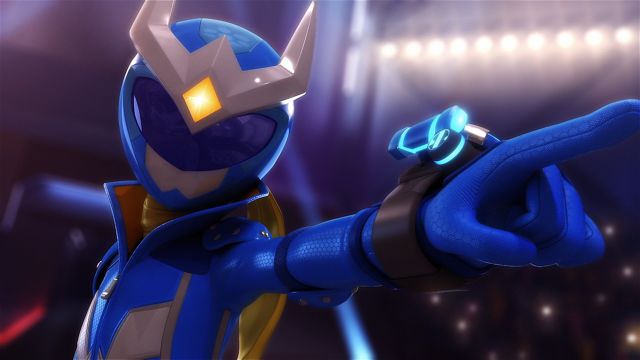 The opening scene of "Power Battle Watchcar: The Counterattack of Watch Mask" takes place in a dark alley with identical armed men hunting down some old guy in a business suit. So I had to wonder, are they clones, or was the production company just being cheap? Actually I was wrong. They are robots. So of course when the good guys respond by destroying them with excessive violence, that's OK, because robots, however humanlike, deserve all the violence that's coming to them.

Where was I? Oh yeah, so apparently there's this woman called Charles (voiced by Hong So-yeong) who goes around using her robot army to force people to sign contracts to compete in the Ultimate Watchcar Battle League, which is also excessively violent. Oh don't worry. Watchcars are technically robots so using excessive violence on them is OK too. Anyway you'd think using a robot army to force people to sign contracts would be illegal and that they could just call the cops. But no, apparently the only way to stop Charles' evil plans is for Jino (voiced by Um Sang-hyun) to sign one of her contracts and...win?

"Power Battle Watchcar: The Counterattack of Watch Mask" is the kind of movie I can spend an entire review just going after the stupid logical flaws and why not. It's not like the movie has any other merits. What's the point of Jino adopting a secret identity to compete in the Ultimate Watchcar Battle League? And why does he wear that mask even when he's at the training compound? I guess there were a couple of scenes in there where Jino pointlessly pretends to his friends that he is not Watch Mask.

Oh yeah, his friends. I recognized them from "Power Battle Watchcar: Blazing Race", a much better movie simply on account of the fact that it had plots which, simplistic though they may have been, at least required some creativity on the part of the scriptwriter. "Power Battle Watchcar: The Counterattack of Watch Mask" just goes through the motions by comparison. Jino teams up with good guys. Jino trains. Jino wins. The end.

Even the watchcars themselves manage to be boring, since the mechanics by which they work aren't clearly explained. Yes, director Lee Yeong-joon does try to convince us that Jino has learned insightful logical powers by reading lots of...books? When there's a computer right in front of him? Why would anyone write books about ancient secret watchcar battling techniques when they are an invention that obviously postdates digitilization?

Yes yes I know expecting coherent storytelling from a children's cartoon is a bit of a lost endeavor but still. Most of the other ones I've seen in recent memory could at least come up with a plot twist somewhere. "Power Battle Watchcar: The Counterattack of Watch Mask" instead tries to make do with vague references to its own TV show, and that's just plain annoying. I'm hard-pressed to see how even young children who are fans of the TV show could get anything out of this genuinely awful feature length version.