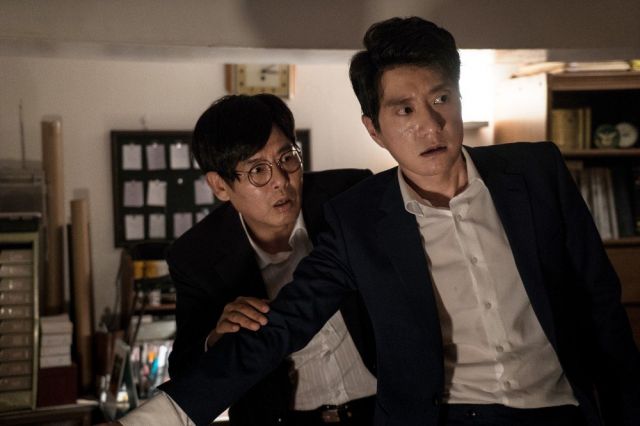 Soon-tae (played by Kim Sang-ho) is a taxi driver with a checkered past. But in the present day, he loves his daughter Dong-hyeon (played by Kim Hyang-gi) and strives to do right by her. That becomes difficult when Soon-tae becomes the perfect patsy for a gruesome crime. From there, it's up to crime-related professional Pil-jae (played by Kim Myung-min) to uncover the conspiracy and bring Soon-tae home. The problem being that Pil-jae is kind of a selfish jerk.

Don't go into "Proof of Innocence" expecting a particularly cerebral character-based crime mystery. Pil-jae doesn't really grow as a person throughout the movie, and is in fact rather baffled as to why Soon-tae would beg for help from him in the first place. In what is perhaps the best possible expression of the movie's overall sense of humor, it turns out that Soon-tae inferred that Pil-jae was a kind man interested in justice based on an event for which he had very limited context.

It's funny watching Pil-jae carefully weigh his options throughout the movie and only finally coming down on the side of justice because the man decides he really dislikes the villains. Don't expect too much depth from that direction either. The Madam (played by Kim Young-ae) is a fairly standard rich chaebol jerk archetype, who expects complete obedience from subordinates and solves her problems with bribing.

So here's what you can expect from "Proof of Innocence"- a fairly engaging crime mystery where we're watching Pil-jae put together various clues until he can finally gain a clear picture of how the crime was committed. More importantly, though, Pil-jae needs to build a trail of evidence. Determined to win, Pil-jae pulls out every sly trick he can think of just so that he can win with a smug sense of satisfaction. Even a nasty looking stab wound isn't enough to shut up Pil-jae's rude mouth.

You can also expect some fairly compelling victims. Kim Sang-ho excels at playing luckless middle-aged men and he's really great here as a man who helplessly struggles against a conspiracy that more than anything else simply wants to crush his spirit. It takes a very long time for Soon-tae to even meet Pil-jae, and until that happens, Soon-tae is simply taking it on faith that his (completely incorrect) appraisal of Pil-jae's personality is true. Kim Hyang-gi is also very good as Soon-tae's loving daughter, who secures a happy ending by making Pil-jae pretend, if only for a moment, that he really is a kind concerned heroic man who believes in justice.

"Proof of Innocence" lacks anything that could really be called truly exceptional, though. It reminds me a lot of "The Advocate : A missing body", another Korean crime mystery film from last year that sticks to formula more than it takes any real risks. And much as was the case with "The Advocate : A missing body", I'm OK with that. Sometimes a good mystery is just what a person needs to start the day on the right foot or end a tough one with a smile on your face. To that extent, "Proof of Innocence" gets the job done.