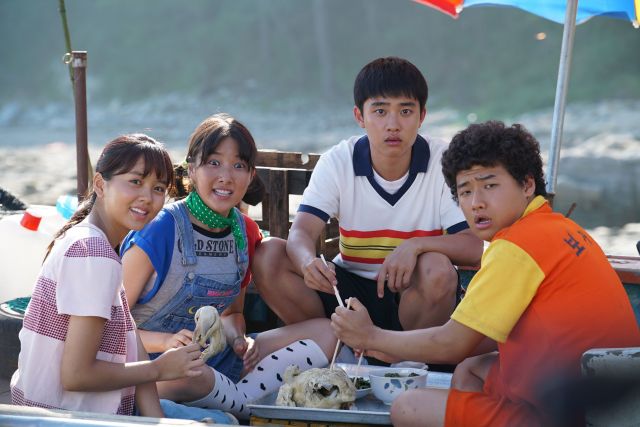 Hyeong-joon (played by Park Yong-woo) is a radio DJ who soon gets trapped in the world of memories in "Pure Love - Movie", a film which spends most of its time in an island village circa 1991. Beom-sil (played by Do Kyung-soo), Soo-ok (played by Kim So-hyun), San-dol (played by Yeon Jun-suk), Gae-deok (played by Lee David), and Gil-ja (played by Joo Ah-reum) are all graduating high school students looking to explore the world. Soo-ok shows the most promise, thanks to a strong singing voice, yet is also limtied by her bum leg.

At its best "Pure Love - Movie" evokes powerful memories of youth nostalgia- a feat made all the more impressive by the fact that I did not grow up on an island, and I doubt very many people in the movie's prospective audience did either. The island is really more a metaphor than anything else. It's a perfectly wonderful location where the characters spend most of their lives, and yet they are still quite excited to see the rest of the world.

The five lead actors are both very appealling as well as wholesome. There's no illicit sex or drugs in this pure story of childhood. Yes, they all snub their noses at authority figures, inevitably get in trouble when caught, and come up with semi-elaborate escape schemes. Watching these little plots unfold and explode on the spot is quite a bit of fun, because each character brings their own particular brand of personality to the cause/solution of the current degree of problems. The cast has quite a bit of good repartee and chemistry along these lines.

And then all the fun times stop. What starts out as a generally cheerful nostalgic romp very quickly turns to the morbid and grotesque when one character accidentally discovers a rather horrible lie. I don't mind a little bit of tragedy in a nostalgic story, but it has to be properly balanced and developed in tone. The closest we get to that in "Pure Love - Movie" is the character of Yeong-il (played by Kim Kwon), who at worst comes off as mildly creepy.

In broader thematic terms too the big tragedy in "Pure Love - Movie" rather undermines the ending. If Soo-ok was really so prone to overreaction (and the other characters really so incapable of noticing it), is she really the kind of girl from whom we can learn valuable long-term life lessons? I can clearly see what writer Han Chang-hoon was going for here- loss of innocence, coming of age and all that is normally good storytelling fodder. But as presented in "Pure Love - Movie" there simply isn't any point to the tragedy because it was so obviously preventable.

What's especially irritating about the big plot turn is that it completely takes over "Pure Love - Movie" and transforms the film from something reasonably fun into a nigh-endless scrawl of terrible depressing emotions, to the point I'm having a lot of trouble even remembering what the more enjoyable parts of the movie were. So my advice is- watch "Pure Love - Movie" until the lie is revealed, and then just stop. It only goes downhill from there.