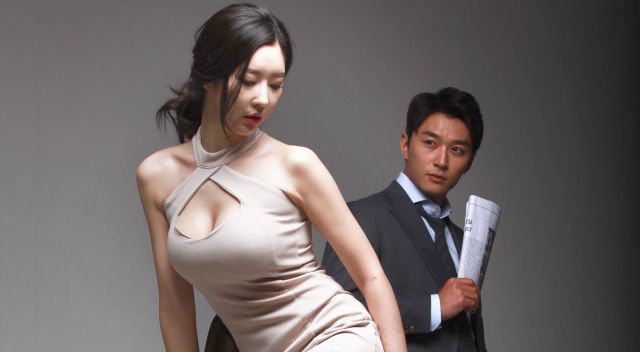 Dong-chul (played by Jo In-woo) is a sleazy guy who boasts to his friends about how he's totally figured out the whole relationship conflict thing. See, Dong-chul has a wife and kids. But they live in the Philippines. So even though Dong-chul has already solved the life goal of getting married and having a family (since he knocked her up in college), Dong-chul is still free and clear to engage in whatever philandering he wants in Korea, where none of this could possibly reflect badly on him. And you know what that means- copious soft core sex scenes.

"Purpose of Reunion" somehow managed to sneak itself into the Bucheon International Fantastic Film Festival this year, even though it's rather obviously aiming for a rather low-brow audience. Well, that's fine by me. One of the nice things about more exploitative movies like this is that they tend not to be that pretentious about sex. The sex scenes in "Purpose of Reunion" are there primarily for titillation and comedy, and they succeed on both fronts.

Yet at the same time the film steers into curious moral territory. We know Dong-chul is pretty indisputably a jerk lothario. His entire romance with Yu-jin (played by Kim Yoo-yeon) basically consists of Dong-chul coming up with thinly contrived excuses to hit on her, pretending like hot hot sex isn't actually his long term goal when in fact it obviously is. At one point Yu-jin accuses him of harassment. To which Dong-chul responds, quite sensibly, that their relationship doesn't actually have a power differential, so Yu-jin could stop this by just not responding to his phone calls.

In this way "Purpose of Reunion" manages to bring up lots of interesting questions regarding agency. On the literal level the movie is just wish fulfillment- wouldn't it be nice if we could just have sex outside of marriage with no consequences? Obviously by the end of the movie Dong-chul finds out that it's not so simple. What's interesting is that the finale reveals that Dong-chul's actions really were taking place in a vacuum.

Essentially, Dong-chul is right. There aren't any consequences for having sex outside of marriage except the ones that exist in your own imagination. And that's the problem. Basically the entirity of human perception exists solely in our imaginations. Nobody can see what Dong-chul is doing but he can't see what they're doing either- and more importantly Dong-chul can't know what they're thinking. The implications of this become a lot more serious when Yu-jin finally ups and spells out the logistical problem with his worldview.

Filmwise, the result of all this is a surprisingly consistent frame of storytelling. Yes, the sex is really hot and seems to undercut any attempt at a moral message but that's the entire point. Cheating seems fun because it's done in isolation as part of a fantasy- that's why it's called cheating, because it's breaking the rules. Whether the ending is strictly speaking a happy one is much harder to tell- in the end, while guys might wish they could be Dong-chul, when any degree of reality is applied to the situation, we're mostly forced to admit that we don't really.

"Purpose of Reunion" is directed by Jung Dae-man and features Jo In-woo and Kim Yoo-yeon.