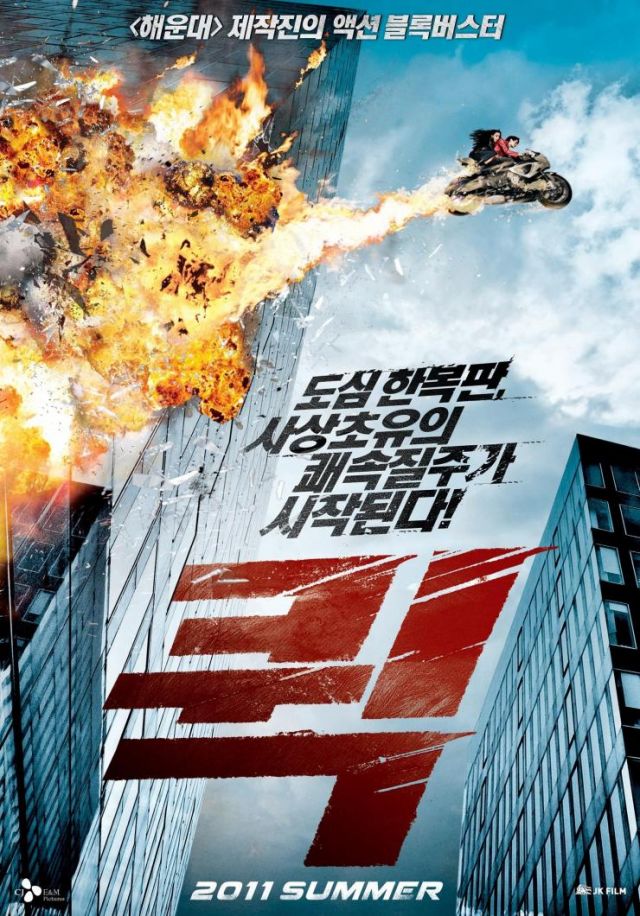 Jo Beom-goo's latest action comedy film "Quick" is currently occupying the number two slot in Korea's weekly box office. There was a significant amount of hype encasing the film but ultimately it's a joy ride you would struggle to recommend as well as recall.

The film's opening scene takes place on Korea's Independence Day as we follow a biker gang spreading chaos and mayhem in the streets of Seoul. The pack cruises through the city streets following their smooth leader Han Gi-soo (Lee Min-ki). Driving along side him is Ah-rom (Kang Ye-won), begging him to pull over and explain why he left her for the tramp that now straddles his bike behind him. Unmoved by her plea, Han charges through an intersection and causes a massive, highly overdone, car pile up with all the clichés you would hope to see. Cars skid and slide out of control, pilling up into a mass of twisted metal and explosions and to end with our action star ramping over the fiery wreckage.

The film put a lot of effort into the special effects and overall production of the high-speed chases, but this opening scene certainly did the film no favours. Instantly we are primed with directorial indulgences that served only as saturated eye candy distracting one from the unimpressive story and flat characterisations. The first scene almost felt like an after thought, one that failed to achieve anything but introduce the film's title.

As Han whizzes around the city to deliver deadly packages on the command of an anonymous puppet master, are attention is diverted from the poor story line and we're forced to consume scene after scene of action antics that were continuously taken one step too far. It's all been done before and without an attractive tale holding it all together "Quick" comes off as superficial flick designed specifically to haul in the summer crowds.

I watched this film with a very excitable women next to me and even her over reactions to every moment were not enough to make me enjoy this film beyond the rotting sweetness of the visuals. That said there are definitely those who will happily consume all that "Quick" has to offer, I was just not one of them.

One thing that still surprises me in Korean cinema is their ability to insert counter emotions that deviate from the expected. There was many a moment where our hero sheds his coolness for a geeky smile or clumsy gesture and moments of tension are displaced by either extreme sadness or laughter. It remains me of, although not to the same degree, "Hello Ghost" as this "2011 Happy Comedy" caused me to shed a tear or two. In the former it works well but here it felt more hit or miss. It was as if the director decided each day what would work in each scene or not, instead of having an overall picture of where the film was going. This criticism extends to the soft motivations of our antagonist, or rather the delayed revelation of intent that sparked this whole storm of adrenaline.

"Quick" is doing well in theatres right now as the summer films make their stand. The other two big Korean blockbusters out now are "The Front Line" and the hugely anticipated "Sector 7", these are probably worth more of you time if you are looking for anything with a little more substance.