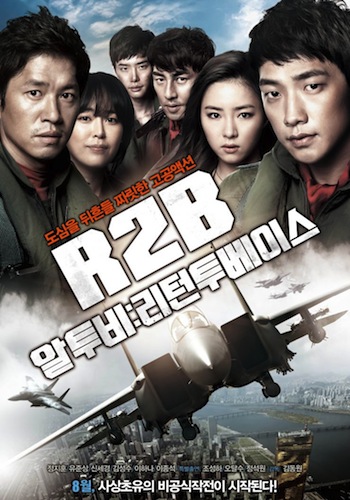 Shin Sang-ok's 1964 film "The Red Muffler" was the first film to be released nationally in Japan and, prior to its release there, it was also shown at the Asia-Pacific Film Festival in Taipei. It was this acclaimed classic, this "expertly-filmed motion picture", that inspired Kim Dong-weon's 2012 action drama "R2B: Return to Base". The film was made with $10,000,000 and Time magazine's 2011 'most influential person' and Korean superstar Rain. However, it also had the unfortunate luck of being released alongside Choi Dong-hoon's record breaking "The Thieves", as well as the historical comedy "The Grand Heist" (which itself brought in close to 5 million admissions)-it lasted three weeks before it fell off the radar.

"R2B: Return to Base" is, if anything, a great spectacle. There are incredibly gorgeous jet fighter scenes that seem to mirror the complexity and intensity of the stories told by some of the WWII veterans on the History channel; its star, Rain, is involved in a number of retro-style music montages as well as an angry/passionate topless locker-room brawl; and there is a love story in there somewhere that keeps you from feeling cheated. It's high-speed entertainment that catches the eye and quickens the pulse, but does little for the genre in Korea and even less for Rain's filmography.

Tae-hoon (Rain) is the hotshot fighter jet pilot whose cocky and arrogant attitude is countered by his passion and sense of justice. There is an unreasonable amount of melodrama early on between the pilots and crew, and the film meanders in this for longer than it should. "R2B: Return to Base" was able to dedicate such a large amount of time to various relationships, in addition to the already engorged tale of Tae-hoon and his mechanic, by hastily introducing the vicious North Koreans as the omnipotent and sinister antagonists. It made targeting the North a little too easy for my liking. It's all very intense and highly concentrated but some scenes will almost win you over single-handedly.

One scene in particular really captures what the filmmakers were able to create when their budget and resources worked for them. When an enemy jetfighter crosses the armistice line, the 21st Combat Flight Unit is forced to chase it out of Seoul's airspace to avoid any civilian injuries. Many visitors to Korea will be aware of its military drills and it's those same sirens that grip and ground the chase. Citizens are flying and driving from explosions and debris, and one office gets flamboyantly blown away from one of the jet's engines-prepare to be swept away in the madness. While scenes such as this may not be sandwiched between the most convincing or original storytelling you'll see in a Korean film, the sight and sensation of having these jetfighters zoom along the iconic Han River was still spectacular. Action sequences, executed like this one, were gripping and frequent enough to kept the adrenaline levels safely above boredom.

"R2B: Return to Base" failed miserably, claiming just 1,201,876 admissions, and it leans too heavily, and at times rather awkwardly, on the likes of Tony Scott's iconic "Top Gun" to challenge the box office heavyweights it was in the ring with at the time of its release. Rain may have indeed suited to role, but without a winning script, his presence was sadly not as influential as one would have hoped. Watch this one for all the high-octane action sequences, the heavy-handed political posturing, and, of course, Rain.