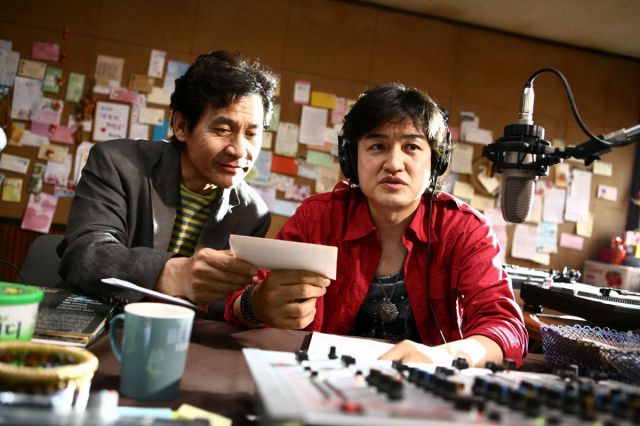 Back in 1988, Gon (played by Park Joong-hoon) was a singer at the top of his game, with national recognition. But eighteen years later, he's stuck playing songs to sparsely populated rooms. Only Gon's fans from better years remember who the guy is anymore. Them, and people who scour the tabloids for arrest reports of yesterday's old stars. Gon's long-suffering manager Min-soo (played by Ahn Sung-ki) falls into both categories, and so, it falls onto him to bring new light to Gon's life with a new, if unglamorous disc jockey job in rural Yeongwol.

Min-soo is actually the more in-focus character of "Radio Star", as we're constantly watching him work in earnest passion to do everything possible to help out his old friend. Min-soo comes off as lacking any kind of personal dignity. Observe his pathetic groveling hardly four scenes in to try and get Gon out of trouble once again. But Min-soo is exactly the kind of friend Gon needs, because Gon himself has too much self-importance.

The disc jockey narrative is an odd twist on that plot. While Gon does badly need to be humbled, his character arc is not about being humbled. Rather, we see that Gon's antisocial attitude has in large part been a product of his having to work in dubious bars under dubious management. Those are the only jobs he can get anymore. But in the call-in radio context, Gon is surprisingly warm. He actually sincerely likes the people in Yeongwol.

The problem is that Gon is too elitist to actually try to talk to people. This is why Min-soo is such an important part of Gon's existence. Min-soo is gentle and patient in all possible contexts, and is able to get people to talk to Gon. Even the contrived fight with Gon that makes up the final act has to be literally contrived for exactly that reason. Min-soo just doesn't have it in him to be mean. Min-soo's earnest obsession with trying really at hard at any task is incredibly endearing. Gon is lucky to have him.

That's not much of an overall arc to go on, but "Radio Star" is the kind of story that does not benefit from extra drama. All of the focus is on the powerful male friendship between Gon and Min-soo, and how this has fostered in Gon a strong sense of empathy that redeems his otherwise unpleasant personality. Gon and Min-soo fight like a married couple. Sometimes they're mean, but at the end of the day they always end up back together somehow or other.

By the way, the soundtrack is really great. It's unique and festive, but not in a way that calls attention to itself. That's also a good summary of the general overall feeling behind "Radio Star", the kind of movie that can take shallow drunk confessions and ramp them up into serious emotional moments because, well, because that's what they are. What use does Gon have for success, after all, if he can't share it with his best friend?