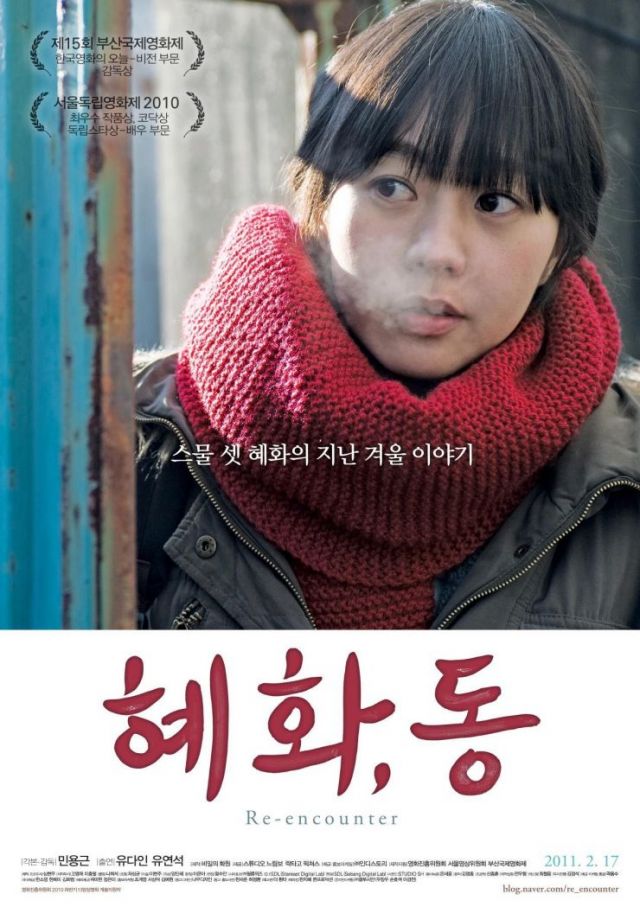 Min Yong-keun's "Re-encounter" is a story about allowing oneself to reopen closed doors and to face the shadows of our past. Despair may run thick through the film and you will have to wait till the final scene to see if there is any chance of hope in this grey and somber melodrama. "Re-encounter" was awarded Best Picture at the 36th Seoul Independent Film Festival; it also scooped the Best Director awards at the 15th Pusan International Film Festival.

The film is smothered in melodramatic themes of miscommunication and despair. Our leading lady (Hye-hwa played by Yoo Da-in) is a simple girl whose world has been coloured grey after the loss of her daughter. The father (Yoo Yeon-seok as Han-soo) left just before the birth of their child. While Hye-hwa's mother is largely supportive of her daughter, Han-soo's family is not so eager to contribute to their future together. After having disappeared for five years, Han-soo reappears and informs his high school sweetheart that their child did not die in the hospital but is alive and has been adopted.

Before Han-soo arrives back on the scene we are presented with Hye-hwa, as she exists in the aftermath of that is her life. She works at an animal hospital/shelter, taking deserted and sick animals off the street wherever she can. Haunted by issues of abandonment, her house is crowed with the dogs she feels she cannot turn her back on. In addition to her dog hording, she keeps all her fingernail clippings in a film case. Our heroine is stuck in the present, unable to resolve or conquer the terrible happenings of her past and, subsequently, incapable of moving towards the future.

"Re-encounter" is driven by its ability to invoke strong emotions surrounding desolation and personal loss. This occurs largely through visual elements in the film rather than through dialogue. Miscommunication is everywhere, and the things that get unsaid or lost are tragic and all too human. It is these situations in which the characters' find themselves that define our reaction to them and director/writer Min Yong-keun guides us with intent through this moving tale. In one scene Han-soo is trapped at a couples home that he believes have adopted their daughter. As the married couple explain to him that he is mistaken we are only invited to watch from a distance, too far to hear the words but close enough to the character to see the effect. These kind of directorial decisions made "Re-encounter" a film where actions really do speak louder than words.

Throughout the film we are enticed with small fragments of hope, all of which prove to be nothing more than stunted rays of light lost in the melancholy. But this is a melodrama after all and one would have to describe the symbolic final scene as more hopeful than happy - an emotion that I happily walked away from the cinema with.