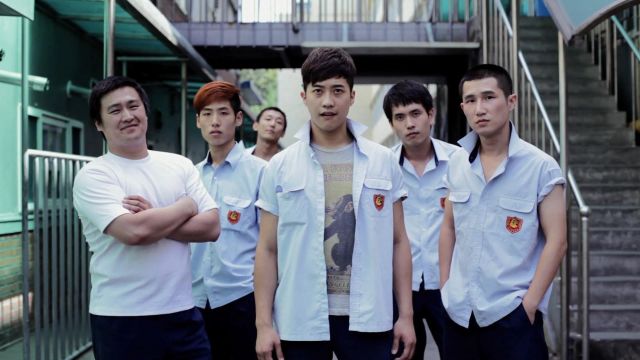 I need to note up front that "Ready Action! Violence Movies" was not intended to be a feature length omnibus. The three short films that make up the larger piece were produced independently of each other. The omnibus packaging is mainly to give these individual pieces wider distribution, as there is almost no demand for short films outside of the festival circuit.

There is one other important factor the three pieces all have together- they are all, in their own special way, love letters to the concept of creating action films. Not action films persay, but rather the idea of making them. "Ready Action! Violence Movies" eschews concepts like characterization and deep messages to instead deliver lots of scenes where people fight each other, in classy independent style.

The first film, for example, features no particularly sympathetic characters at all. All the action is driven by aggressive jerks who start fights for no reason. Well, there are reasons. They're just not particularly good reasons. And they're not particularly good fights either. We don't even get to see the only fight that involves any degree of actual skill.

And yet I really enjoyed that piece. Why? It's simple- in real life bullies do most of the fighting. And bullies aren't actually any good at fighting. They win mainly because they're aggressive enough to start a fight in the first place against someone either too meek to fight back or too unprepared to offer up much resistance. And it's really genuinely funny, just watching people look for excuses to start conflict for no reason. It's really dumb. On a meta-level I can appreciate the absurdity that went into scripting this. It's a good thing real-life jerks are so shallow or the whole piece would come off as contrived.

The next film is the most explicit with the meta-commentary, as we get into the details of how, specifically, people make terrorist hostage videos. Filmed in single shot, the piece is mainly an exercise in comparing how the setting of video clashes with the actual personalities and the way the whole thing is staged to train the viewer into thinking it's dangerous, even if it's not. The whole thing is a build-up to a single gruesome joke- but it is a pretty good joke.

The final film also deals with build-up, of a different sort. Director Kim Do-kyoung wanted to make a story about a kid taking revenge on his bullies in high school, and that's exactly what he did. Even though the film is riddled with just about every cliche imaginable, it's this same bluntness that makes the final extended confrontation so much fun. These tropes exist for a reason- they work, and done with the right style, they work quite well.

I can't really praise "Ready Action! Violence Movies" for being groundbreaking or innovative, because honestly, it's not. But what the three directors have correctly grasped about the concept of the action film is that they don't really have to be clever in order to work. They only have to be fun. For this reason, I can recommend the set highly to anybody who likes action movies, in concept or execution. Even if these films were mostly designed from the meta-perspective, there's a lot of mainstream appeal here that works quite excellently.