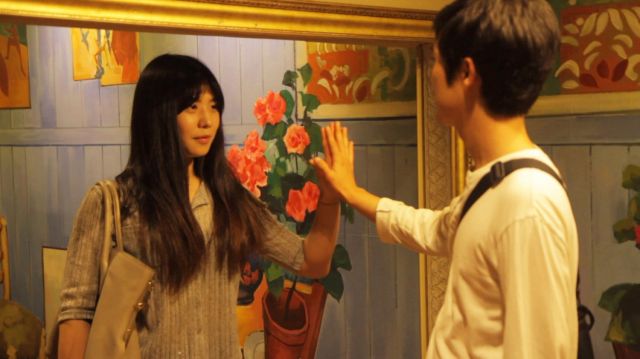 In the first few scenes of "Recording", Yeon-hee (played by Kim Hye-yeon-I) introduces the basics of the premise. Some very stupid puns are made about Yeon-hee's aspirations in life, and also about the name of her boyfriend Min-cheol (played by Choi Hyun-woo-I). Then we meet the third wheel of their relationship, Min-cheol's best friend and aspiring film director Woo-seok (played by Seo Jin-won-III), who has questionable taste in t-shirts. Then, finally the premise hits you. Yeon-hee is dying and "Recording" is the last commemoration of her life.

As tragic love stories go, "Recording" distinguishes itself by being somehow disproportionately vibrant. Yeon-hee is a normal twenty two year old woman. Even staring straight in the face of death, Yeon-hee is happy because at any given moment, Yeon-hee can barge into Min-cheol's room, wake him up and generally annoy him...but he won't be mad. Min-cheol lights up with joy any time he's with Yeon-hee, no matter the context, because she is the guiding beacon of his life.

It's only in the têteàtêtes between Min-cheol and Woo-seok that we get any sense of the very real heartbreak that's going on under the surface. A large part of this is just separation anxiety. Even if Yeon-hee wasn't sick Min-cheol is very fixated on her existence. The added stress of knowing that Yeon-hee could disappear completely at any given moment is what breaks Min-cheol's heart, and why he needs Woo-seok around when Yeon-hee can't be.

Another scene I keep coming back to is the very clumsy reenactment of how Yeon-hee and Min-cheol first met. For the most part they completely fumble the scene. But then right at the end, just the way Yeon-hee very shyly accepts Min-cheol's proffer of a date, and then the way Min-cheol responds in obvious disbelief. We can see, in that specific moment, that Yeon-hee and Min-cheol may be hazy on the general specifics of that first encounter, but they definitely remember that sharp emotional pang at the end.

That's the beauty of young love that can evolve into something more. We still see Yeon-hee and Min-cheol as being these basically immature kids, yet once upon a time, they were even younger kids who were fundamentally insecure, and through each other, they found the confidence to be constantly silly. They stopped worrying so much. They grew up just enough to realize that nothing matters, just so long as they have each other. Hence why by the end Min-cheol is left tearfully pondering the prospect of a life without Yeon-hee.

More than the mockumentary format it's the youthful optimistic tone that really sets "Recording" apart from the typical terminal illness romantic melodrama. More than the usual film in that genre, "Recording" really hits hard in showing us how lucky Min-cheol was to have someone like Yeon-hee guide him in the ways of love, just as Yeon-hee was lucky to have such profound happiness in the short time she had. Even Woo-seok was lucky just to observe them and understand that such a personal connection is possible- as are we.