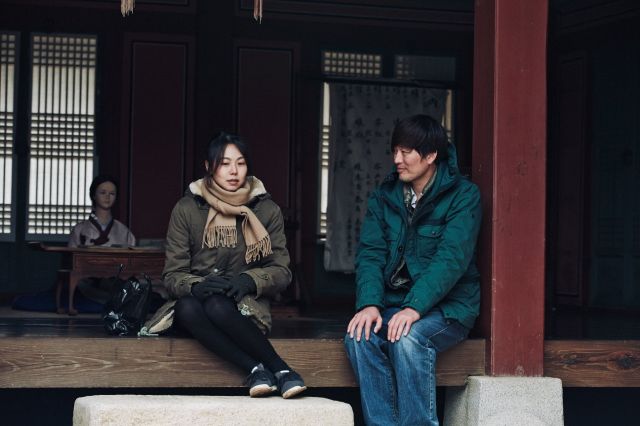 Choon-soo (played by Jung Jae-young) is a well regarded film director on a winter trip to Suwon to give a guest talk about one of his movies. Aside from this one errand, Choon-soo apparently has nothing better to do than wander around cultural sites and eventually strike up a conversation with Hee-jeong (played by Kim Min-hee). As it turns out, Hee-jeong also has nothing better to do with her time than have random conversations with random strangers. Although it probably helps that Choon-soo is a somewhat famous stranger.

You may have noticed that, in the course of that summary, there was nothing that really resembled an actual plot. Well, "Right Now, Wrong Then" is a Hong Sang-soo film- so really, what were you expecting? The film isn't an exercise in story as much as it is one of concept- the gimmick this time around being how the "wrong" course of conversation can lead to the "right" results, and vice-versa. Essentially, initial arbitrary decisions about how to have certain conversations affect how we see the inevitable separation.

This is actually one of the simpler Hong Sang-soo gimmicks. "Tale of Cinema" and "In Another Country" both used a similar format of the same story told in different ways, but in both those cases one character was trying to manipulate the situation to a specific outcome. "Right Now, Wrong Then" rather paradoxically has Choon-soo succeed the second time around by more inadvertently being a jerk, such that when he's finally exposed as a fraud, Hee-jeong ends up feeling more pity than hate.

Beyond that there's not much I can write about "Right Now, Wrong Then" that would not also apply to most Hong Sang-soo movies. I have to admit, the man has a talent for getting funding and accolades for making the same movie a slightly different way at least once a year. The main reason for this, obviously, is that he's good at what he does. Hong Sang-soo always finds such wonderful places to set up a static camera, and Suwon in the midst of snowfall easily ranks as one of his best locations.

The second reason is that Hong Sang-soo is very good at making movies that appeal to people obsessed with movies. Some might say that Choon-soo is a proxy for Hong Sang-soo himself, but I'm more inclined to think Choon-soo is an amalgration of the kind of people Hong Sang-soo has met since he hit the big time. Choon-soo is mildly egotistical, extremely pathetic, but mostly just lonely even though his entire job is supposedly being an expert on the human condition.

If that came off as mean, well, watch "Right Now, Wrong Then" yourself and see if you can come up with a more sympathetic take on the character. I really can't, and it's fitting that even the "right" results don't exactly result in Choon-soo getting what he wants. The difference between "right" and "wrong" results is kind of like the difference between a "good" and "bad" anecdote. Technically one is better than the other but let's be serious. Both of them are just amusing stories you can tell at parties and little more than that. Much like a Hong Sang-soo film itself- or any film really, come to think of it.

"Right Now, Wrong Then" is directed by Hong Sang-soo and features Jung Jae-young and Kim Min-hee