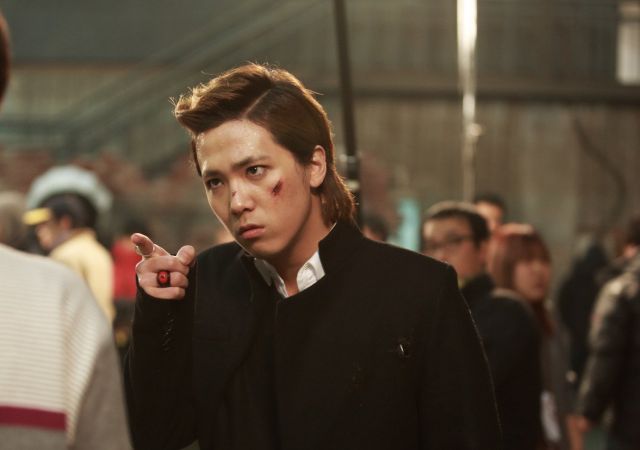 Hospice care is for those hopeless patients who have nothing left to do but wait for their death. Choong-Eui (played by Lee Hong-ki) is a selfish pop star who, as punishment for an ill-advised night out drinking, is forced to finish his probation doing volunteer work for an isolated hospice. Problems come up right away. Choong-Eui is a completely unlikable jerk. He winces, complains, and generally acts as unpleasant as possible to as many people as he can.

The story structure behind "Rockin' on Heaven's Door" is pretty simple- it's obvious that we're supposed to like Choong-Eui more throughout the movie, but I just couldn't bring myself to. He continues his spoiled behavior even when other characters offer favors in exchange for his musical talents. What finally gets Choong-Eui to start acting sensible is a flashback to his own sad life experience. Unfortunately, this falls flat, since it seems like anyone with a soul should be able to figure out that death is serious without having to mine the memory banks. Especially since the movie takes place in a hospice.

The problem with "Rockin' on Heaven's Door" is that even though death is an obviously pervasive element of daily life in a hospice, the movie seems to go out of its way to avoid discussing it. Sure, it's good for a tearjerk every so often, when we find out that such-and-such character is about to say the final good-bye. But this is a hospice. It's explicitly mentioned that people here have to deal with death all the time. It's not the fact of death that makes the hospice story interesting- it's the constant sheer quantity of it. While Choong-Eui's memories are supposed to be sad, they're really just irrelevant considering the gravity of the situation in front of him.

Beyond that, the movie goes through all the most basic motions of the "jerk decides to start behaving like a good person" plot, but without the creativity necessary to make such a story particularly interesting. When, near the end, other people misunderstand his motivations, it's a little infuriating how everyone seems to have a lot less patience for Choong-Eui now than they did at the beginning, back when he was a complete jack-ass. The bigger issue is that Choong-Eui is boring to watch regardless of the current state of his personality.

Still, even a movie with an obnoxious main character can be saved with a good supporting cast- which again, is not here, or at least not in an interesting capacity. The only thing all the hospice patients have in common is that they're all going to die at some point soon in the future. But this isn't really written into their characters- they're all just stock archetypes in a fairly generic plot that don't really have anything interesting to do. An entire storyline revolving around music pops up- and while the music is good and nice to listen to, there's not that much of it, and the music itself is little more than a plot device. It has almost nothing to do with the actual setting of the hospice.

What's really disappointing about "Rocking On Heaven's Door" is that there's a perfectly good concept in here that's just buried behind an irrational insistence on sticking to a generic narrative. The final extended shot of the movie is a great statement on the full implications of Choong-Eui's ultimate decision and what it means for him, and the hospice, in the long-term. It's just such a huge shame that the movie to that point didn't actually build up to it.