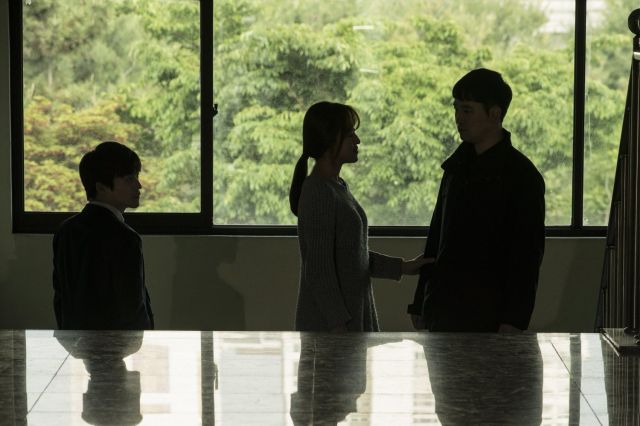 While "Romans 8:37" concerns itself almost exclusively with misdeeds inside a fictional South Korean megachurch it is not a movie about how Christianity is bad. In an unusual approach for the sensational exposé genre of film, "Romans 8:37" centers its revelations around Gi-seop (played by Lee Hyun-ho), a devout member of the church involved in the political battle through which the revelations emerge. For all this, Gi-seop does not lose faith. But he does waver. Oh how he ever wavers.

The biblical metaphor at play is immediately obvious. Much like Jesus had to battle the Pharisees, Gi-seop must battle the corrupt factions in his own church. There's just one problem. Gi-seop isn't Jesus. Far from being someone who can affect major change, Gi-seop is so quiet and uncharismatic that his passion for reform is limited to running a support role for the least bad candidate in the church's internal power struggle.

This, of course, is well within biblical teachings. Trying to be Jesus is straight up blasphemous. If humans could be Jesus, we wouldn't have needed him to come down and save us in the first place. Scripture is intended to allow for the common person to find salvation. It is not a manual for conquerors- a point directly referenced by the literal "Romans 8:37". No, in all these things we are more than conquerors through him who loved us.

The next two verses are pretty good too. For I am convinced that neither death nor life, neither angels nor demons, neither the present nor the future, nor any powers, neither height nor depth, nor anything else in all creation, will be able to separate us from the love of God that is in Christ Jesus our Lord. This is Gi-seop's spiritual reckoning, and it's far more brutal than he ever could have imagined. The appearance of very real victims who have suffered trauma at the hands of church leaders only compounds Gi-seop's guilt. How can he worry about his own soul, when damnation has already afflicted far more innocent people than himself?

The literal plot of "Romans 8:37" is just about the power struggle in the church and its inevitably depressing conclusion. But more than the story, the engaging material here is about Gi-seop's attempts to reconcile abstract theology with what he learns through the political struggle, and further relating that to his everyday life. Intertitles of various Bible verses appear to flow straight from Gi-seop's diseased mind- this is the spiritual comfort Gi-seop must cling to in order to maintain his sanity.

I was surprised to find "Romans 8:37" so lucid, considering how much of it is rooted in serious theology. Considering that writer/director Shin Yeon-shick tends to make films for the art house circuit built around explicitly secular themes, I'm left wondering whether he was always this complex a Christian thinker, or whether "Romans 8:37" is just the painstaking result of endless research into the question, how would a sincerely devout Christian react to having firsthand knowledge and details of hypocrisy in the leaders of his own faith? Either way, the film is suitably brilliant.