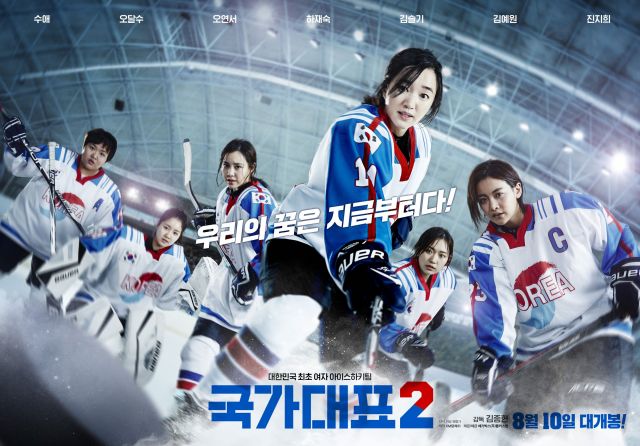 The year is 2002. Don't tell director Kim Jong-hyeon that, though- minimal effort is made at having "Run-off" actually look like 2002. Anachronisms in the set design include Angry Birds and cell phones capable of producing usable video. Anyway, the plot. Dae-woong (played by Oh Dal-soo) is putting together an ice hockey team for the 2003 Asian Games. Chief among the recruits is North Korean defector Ji-won (played by Soo Ae). The team undergoes rigorous bonding and training in the hopes of pulling off an inspiring victory.

At least that's what's supposed to happen in sports movies, but "Run-off" fumbles the genre from the very beginning by picking a sports team that's, well, that's just not very good. South Korean women's hockey has consistently done very poorly in every tournament it's entered since its founding. This was mostly around the same time as depicted in "Run-off", although that's the only aspect to the movie that can at all be considered true to life.

Yes yes, I know, movies are fiction, but real life inspiring sports stories are so common I was rather baffled as to why anyone would make a sports film about a generally incompetent team. Director Kim Jong-hyeon, apparently realizing that turning the 2003 South Korean Women's Ice Hockey Team into a standard sports story would require a preposterous rewrite of history, then makes an abrupt detour as "Run-off" instead becomes a story about Soo Ae's past.

And that's...kind of interesting I guess? "Run-off" is less explicitly bad as it is incomprehensible. A good movie can be made about a ragtag band of misfits overcoming their differences to become an international sports team. It doesn't even have to be a good team- just ask the Jamaicans. Likewise, there's plenty of fertile material to make an interesting story about how the international sports circuit is one of the few places that relatively normal North and South Koreans can talk to each other.

Making a movie that does both isn't that impossible either- "As One" managed that task quite exceptionally. So I don't really know what to make off "Run-off", which seems to be satisfied just taping together sports and reunification tropes at random behind a team with such a lousy historical pedigree. Why does this movie exist? Did someone just have a lot of ice hockey equipment lying around and the production company decided that, you know, why not, let's make an ice hockey movie, it's been awhile since anyone's done a sports movie in this country and they tend to be popular right?

Well, I was not impressed. "Run-off" is never really explicitly terrible. Director Kim Jong-hyeon does get that detail of the genre mostly correct. The characters are likable, if thinly drawn, and they do in fact become a team. But aside from these extremely bare bones compliments I honestly can't think of anything at all noteworthy or interesting about "Run-off". The movie is not only generic it's rather pointless, good for little more than background noise for a person engaged in a more mentally intensive task.