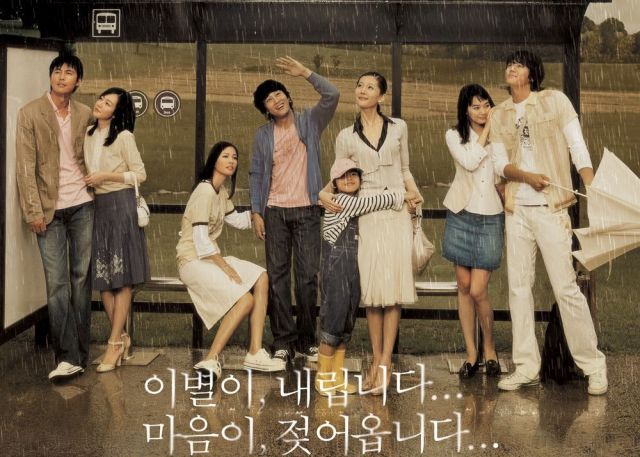 Foreboding title notwithstanding, the first thing that really stands out about "Sad Movie" are the comedic elements. Between the four vaguely related love-centered plotlines, there's this strong undertone of dark humor. There's a somewhat hostile relationship between mother and son, a threatened break-up over unchanging circumstances, a threatened marriage over unchanging circumstances, and a romance where one of the participants is neither seen or heard. It's all as bizarre as it sounds, yet to anyone who's been in these kinds of situations the emotions ring quite true.

What unites all these disparate stories is the overhanging dread of inevitability. These characters are all terrified of an emotional event rupturing their lives and everything they understand about it. But what's worse is, their assumptions are almost certainly correct. There's a powerful sense in "Sad Movie" that fate is not something that can be fought against. Eventually, fears have to faced, and peace has to be made, if only so that these people can move on in the aftermath.

Ah, but to live in the moment, and appreciate those feelings as we have them- that's what love is all about, right? Better to have loved and lost than to have never loved at all? You know, I'm not so sure about that actually. Every storyline is marked by exciting, wonderful events that mark the center, scenes that depict the enormous love and joy available to those who can find a person they can really care about. But then there's that equal and opposite plunge into despair. Even to someone who wants to nitpick about the way these events play out in this particular film, it's inescapable that sooner or later the sad stuff always happens.

It's part of the brilliance simply of this film's title. If I go watch a movie called "Sad Movie", I can hardly get upset when significant chunks of it induce tears, even if almost everything that happened up until that point is just quality romantic comedy material. This film knows exactly what it is- the goal here is to go after the heartstrings, force that catharsis, force that sentimentality, force that empathy with fellow human beings who go through that same sad comedic dance of life as the rest of us.

The script in particular deserves high praise. Screenwriters Hwang Seong-goo and Kwon Jong-gwan don't waste energy trying to be overly clever. Yes, the four couples are connected- but these connections range from tight to vague to contrived, and it's really not worth overthinking the similarities of the stories to each other except in broad strokes. Where one character finds himself clutched tight in the jaws of irony, others live out more traditional stories.

Even as the comedy is important enough and significant enough that it should not be ignored, in the end this film is exactly as advertised, however much the viewer may wish by that point that the title itself is just another elaborate piece of dark humor. Yes, it is a "Sad Movie". Yes, it's probably exactly what you're expecting it to be. But that film, silly and transparent though that title makes it seems, is absolutely worth watching and should be taken without those cynical reservations. There's a humanity in its treatment of love that's all too rare, a genuine heart of emotional breadth that's inspiring even as it's, well, sad.