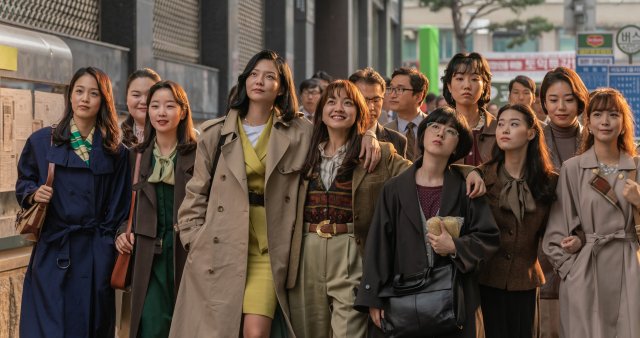 In the eighties, South Korean business was really starting to branch out worldwide. Consequently, Ja-yeong (played by Go Ah-sung) grows up to be a young woman who wants to be a careerwoman. As she exictedly exclaims in her introduction, she has achieved her dream! Which is to intern with Samjin Company mostly just doing secretarial work. But worry not- a new initiative offering preferential hiring for employees with high scores on the TOEIC English exam drives the excitable Ja-yeong, the confident Yoo-na (played by Esom) and the number genius Bo-ram (played by Park Hye-soo) to improve themselves.

The main obvious complaint I can make about "Samjin Company English Class" is with its political messaging. The movie is very unreasonably optimistic. An early scene darkly and effectively notes how a woman with the temerity to want to start a family can expect to be bullied out of the workplace. This isn't much of a concern for our leading trio, who show little romantic interest in men. Nevertheless, it's disconcerting that sexism is acknowledged yet not particularly oppressive.

The bigger issue is when the movie jumps off into the issue of toxic runoff and corporate malfeasance. These are extremely real problems, and corporate business structures are highly incentivized to engage in cover-ups. While it's admirable that the lead characters have ethical principles that override their career concerns, it beggars disbelief they have any sympathetic allies at work. These people would bully a loyal pregnant employee into quitting, yet accept behavior with a considerably larger negative impact to the company bottom line?

Matters are not helped when this storyline also morphs into a narrative about international finance, and the importance of company loyalty. Samjin Company as a concept is just too intensely idolized. "Samjin Company English Class" writ large simply has too much faith in hierarchies that to this day haven't changed their behavior. It's uncanny just how most of the fundamental conflict can be easily transplanted to the modern day.

But then the main reason to watch "Samjin Company English Class" isn't for the story or the history lesson. It's to see the leading ladies in snappy nineties style wardrobe, looking perky, cool and nerdy in distinct fashion. It's honestly a shame that "Samjin Company English Class" is a film rather than a television drama, because it's got exactly the kind of retro look a person can get excited to watch week after week, watching the lives of the characters slowly unfold.

The fast pacing through "Samjin Company English Class" isn't bad, exactly, there's just so much going on it's difficult to appreciate the finer details. I've barely even mentioned the titular English class, mostly because it's not as relevant as you'd expect. Tyler Rasch does manage a fairly excellent turn as the English instructor with improbably excellent Korean. He provides much charm, as do the similarly endearing attempts by our lead characters to speak English, however incompetently. The style in "Samjin Company English Class" is superb. The substance, not so much.