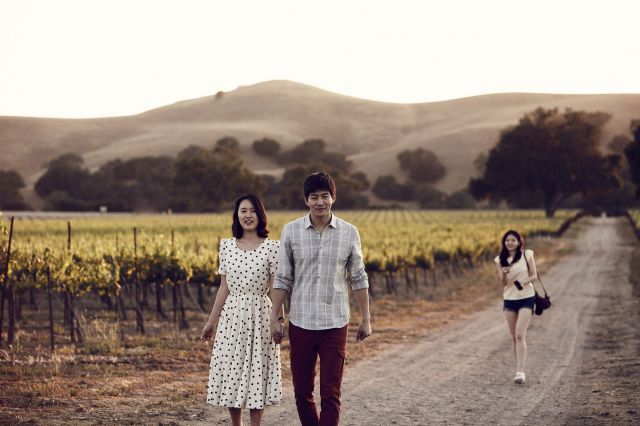 Jeong-woo (played by Lee Sang-yoon) works as an independent freelance music writer. Conventionally speaking this would make him cool, except that we see what work is actually like for Jeong-woo and, well, it's kind of dorky. It involves lots of phone calls, moving around boring local areas and arguing over the ridiculous motivations that need to be discussed ad nauseum with his clients. He doesn't have much of a social life, either, so naturally Jeong-woo soon takes an interest in the attractive Soo-kyeong (played by Yoon Jin-seo), who he meets, like everyone else Jeong-woo meets, through work meetings.

"Santa Barbara" is definitely a romantic movie, but it's not really a romance in the narrative sense. There's no drama about the obstacles facing their relationship. To the contrary- at every point their mutual attraction is defined by a complete absence of drama. Jeong-woo and Soo-kyeong get along with each other. There's no magical moment they fall madly in love. It's quite literally a matter of Jeong-woo being attractive and pathetic enough that Soo-kyeong decides he's worth keeping around.

Even in the broad sense "Santa Barbara" doesn't have much a conflict. When the characters finally arrive at the titular city, the only possible source of tension is over the actions of a business associate we never actually see, and the problem is resolved not through the actions of Jeong-woo and Soo-kyeong, but off-screen. This entire portion of the movie is just a travelogue through southern California.

The lack of story, though, is more than made up over by the relatable characters, and especially their rather lackadaisical lot in life. Jeong-woo and Soo-kyeong are both successes, yet their lives really don't feel successful. They just feel really dominated by work. The big essential irony of the apparently pointless vacation is that if not for these delays, Jeong-woo and Soo-kyeong would never have any actual reason to relax in a beautiful foreign country. Day by day there's just no excuse for it.

And what a nice vacation it is! The music in "Santa Barbara" is strong throughout, but I especially loved the way it worked together with the landscapes in the latter portion. The soundtrack consists almost entirely of simple piano compositions, yet these never really get old. After all the hustle and bustle of these characters just working all the time, it's a welcome moment of relaxation to just watch them screw around in vineyards for awhile waiting for something to happen.

"Santa Barbara" is never a particularly deep film. This as well, though, is a major part of its charm. These characters are required by their occupations to find meaning and complexity in really stupid things, and what both of them really need is just a moment to step back and not think so hard about everything. Director Cho Sung-kyu establishes a very comforting groove here, making for an effective combination of a movie that manages escapism while still being unusually realistic. Admittedly, the spoken English segments aren't so great. With everything else that's going on here, though, really, who cares?