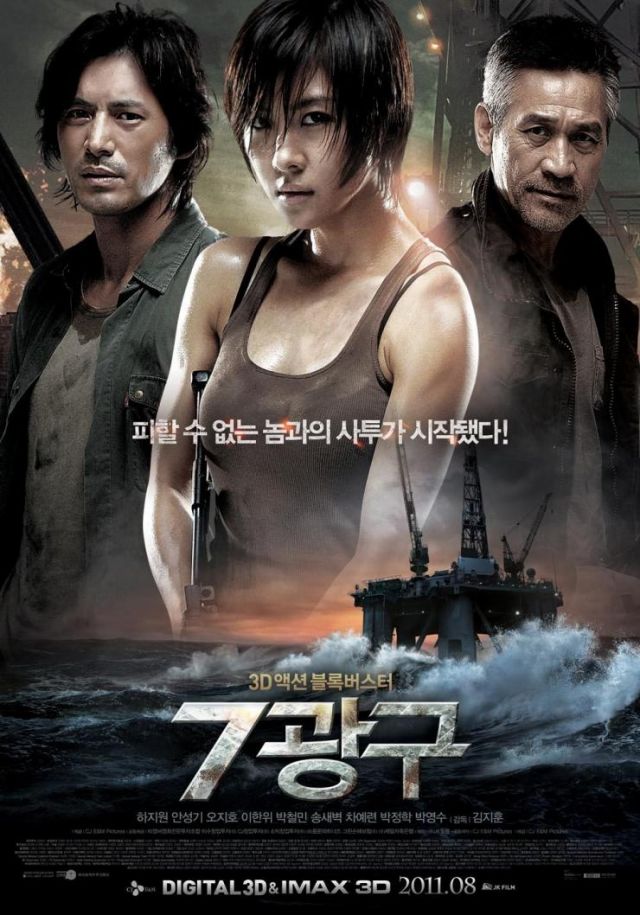 Korea's first big budget 3D feature failed. The extreme hype and mass marketing served only to raise the film to a height from which it was destined to fall from. The success it received in its opening week was a good start to Kim Ji-hoon's monster flick but once word got out of the film's many failings, its numbers dropped sharply as a result of the scorn it received from critics and the public alike. "Sector 7" was a huge disappointment and the degree to which it fell short of glory is staggering.

Before I dive into the criticism, let's first look at an area where the film did well, or at least showed the most potential. "Sector 7" had a number of things going for it, the most exciting of which was its premise. Sector 7 is an actual Joint Development Zone (JDZ) involving both Korea and Japan respectfully. Japan has shown little interest in it but the area has represented the hopes of Korea to become energy independent. Oil is the desire in the film and it carries not only the characters' hopes but the nation's as well. The oilrig tasked in finding the black gold is manned with individuals who strive to make a success out the exploration project. But, when a mysterious creature starts terrorising the rig, the needs of the crew suddenly become much simpler.

This premise offers a strong foothold from which to launch but unfortunately the film misfires and avoids capitalising on some of the socio-political issues that could have added much need credibility to events. Just as "The Host" was primed with ideological criticisms of the American military's presence in Seoul, "Sector 7" could have tapped into the on-going political jousting over territory between Korea and Japan. Nothing overt or intrusive, just a hint or subtle reference would have bolstered the context on which the film stood.

Another plus the film had in its favour was its cast. Actress Ha Ji-won was quick to be called Korea's Angelina Jolie, choosing to perform many of the stunts herself, and the support cast list was nothing to overlook either. Actors like Ahn Sung-ki, the drama star Oh Ji-ho, Lee Han-wi, Park Chul-min, and Song Sae-byeok all helped to create public interest in the film, as well as investment towards the film's success. Unfortunately, they didn't gel well together and the impressive cast prove to be a double-edged sword that hindered more than helped. The range and types of actors on screen, as well as their distinct personas, felt like an uneven weave as each brought something unique but asynchronous. As the screen passed from one character to the next, there was a distinct expectation of what any given character brought to each beat, and the result was less a waltz and more a botched hoedown.

Of all the cast members, it has to be said that Ha Ji-won's shallow and unconvincing performance was the weakest. The degree to which her portrayal of the masculine heroine was influenced by the film's weak script is debatable, but what is clear is that she struggled. Her arm thrusting running was painful to watch, as was her constant panting and gasping. Besides these physical distractions, her character seemed doomed from the start as she was poured into a mould so constricting that it is hard to place all the blame solely on her. She was almost over-acting at times and the story didn't allow too much in the way of reflection or development of her character.

"Sector 7" was amazingly bland and unoriginal. The set-up itself was as uninformative as it was dull. Characters and their backstories where roughly handled and the film's mechanics did little to reinforce or add any meaningful dimensions to them. Han Jo-won's character was overtly labelled as macho and manly, and it was all a little too on-the-nose for my taste and many of the support cast suffered the same signposting. This kind of lazy storytelling is unacceptable and counterproductive, especially with this film being the landmark one that it is. The characters were never given a chance to mature or evolve; instead they were confined to the drawing board on which they were prematurely birthed. But actors are just that, and are nothing without solid story to act out – yet another area "Sector 7" fell flat.

"Sector 7" is a case study in flawed progression and fuzzy narrative logic. The numerous holes that fester within it are simply laughable and tragic in their own right. Scenes are plastered together with tape and hopes, voiding any tertiary meaning that could've been created by the deliberate pairing of scenes and ideas. The editing process is supposed to smooth over the disconcerting jumps made by the cut, but in "Sector 7" they only serve to complicate matters and raise more questions of flow and continuity.

Why does an oilrig have a self-destruct button? Who needs motorbikes in the middle of the ocean? Where did that flamethrower come from? Questions like these are a plenty and with them come frustration and cinematic awakening. When one watches a film there is an intrinsic need to become immersed in the spectacle as a prerequisite to enjoyment. The narrative's inconsistencies and unresolved fishers hinder pleasure and never allow the viewer to become fully engaged in it. It's like going to sleep but never being able to reach REM sleep, an exhausting prospect. The film prides itself on its VFX but despite the enormity of their resources, there is criticism to be dished out here to.

The film made much of its visual prowess and technical capabilities but the truth of the matter is they weren't enough to compensate for poor story telling and lazy film mechanics. Even when considered in isolation, the film's use of CGI was excessive and all too noticeable. The same type of shots were repeated and dulled of whatever impression that might have hope to hold. Extreme long shots being push into close-ups as objects whiz past only drew undue attention to the film's mechanics. A self-referential film was definitely not on the filmmaker's agenda and the lack of discipline in this regard resulted in a saturated piece that used its post-production tools as a crutch. Even the monster itself seemed overly complicated and its position and movement within the frame allowed the viewer to scrutinise it with a surgeon's eye (Think of how the "Transformers" series handled the required detailing of its titans with quick movements and dynamic camerawork). Fear and tension were thus sacrificed for displaced presentation and showy cinematics. And if fear and the sense of danger are absent in a monster film, what else is left?

The handling of the monster was problematic. Yes, it could be interesting to have a monster from the deep mercilessly ravaging an oilrig's inhabitants. But where was the explanation, the driving force behind the creature? Why was it so hell-bent on fury and death? The film offers very little in the way of justification for this creature's behaviour and, as with so much of the film, this was another missed opportunity to add depth and context to the piece. In some cases, the film planted a seed of doubt and the potential fear but never bothered to return or expand. The monster's eggs or embryos smeared around the power station, the bite one of the characters received from the little creatures in the lab - these instances were delivered at face value and never matured as ideas or used as fodder for potential threats. I would have loved to see his lip slowly swell and burst with the little beasts at a choice moment, or for the slime to reveal some darker secret or mystery to the monster's origin or future.

Taking a step back now, "Sector 7" has some core themes running through it that are worth mentioning. There is this strong idea that greatness and prosperity can emerge from the baron and seemingly unlikely. Our heroine is obsessed with the notion that they will find oil as she hopes to honour the memory of her father who died on the rig years before. She is stubborn and driven by this dream and strongly criticises those who offer any opposition to it, calling out their lack of determination and persistence. Persistence in the face of an unlikelihood is what drives her and when our monster presents itself, her drive seems displaced instead of paralleled with the new conflict at hand.

Her drive is deeply linked to the Korean notion of "Han". It's a culturally specific term that can be described as a feeling that is "intensely personal, yet carried around collectively, a national torch, a badge of suffering tempered by a sense of resiliency" (taken from John M. Glionna Los Angeles Times' article: "A complex feeling tugs at Koreans"). Here would have been a great area to introduce or bolster the film's context with some form of socio-cultural hook. The notion of "Han" in Korea is one born out of tragedy and the pain and suffering one endures while moving forward. It is this idea that drives the film and it is a shame it was executed the way it was. The film's conclusion is evidence of this idea as Sector 7 is seen to have a number of new oilrigs spread out gathering the newly discovered oil. Here we see that our heroine's goal has been achieved but the personal sense of loss and pain she feels is still present as she reads over the words of her fallen rig mates.

"Sector 7" was not the film it could have been. With so many issues and flaws, the film makes for a fascinating read of self-destruction and failure on all levels. It was a shame that this was the result but I hope that the industry will take some lessons away from the film as they move forward in what is an otherwise thriving and exciting industry.