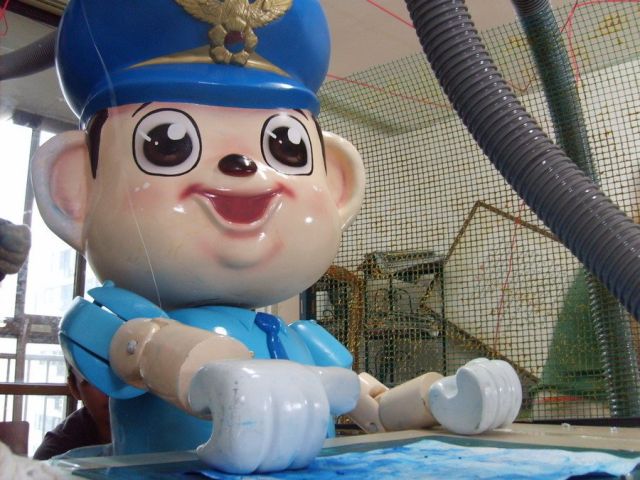 The opening of "Self-Referential Traverse: zeitgeist and engagement" doesn't exactly have anything to do with the rest of the movie- it's just a sort of faux sitcom where the mundane laughtrack experience is punctuated by political discussion. The kind of awkward political discussion you might have had with your father, back when you were a teenager, becoming aware of a wider world which your parents didn't seem to know or care about. Then writer/director Kim Sun moves on to the main story about Podoli, the adorable mascot of the Korean police, trying to build himself a pair of legs and murder the borderline sentient rats in his apartment. And then things get weird.

By the way, Kim Sun is best known for making incomprehensible experimental films, so the general incoherence shouldn't be much of a surprise. That's what a good experimental film is anyway- it doesn't make sense even after it's explained. Is a dick joke an elaborate comment on the patriarchal power structure and how it projects power relations on to inanimate objects, or is it just a dick joke? Really, it's probably best not to overthink such questions.

Aside from the dick jokes, and the obvious political commentary, "Self-Referential Traverse: zeitgeist and engagement" is really just a hypothetical imagining of what life is like for Podoli. And if you've ever seen Podoli (he shows up in television dramas sometimes), it's hard to ignore how tempting the premise is. Podoli is a cartoon character meant to encourage good relations with the police, a profession that's pretty much the opposite of cartoonish. Podoli isn't cute or scary so much as he's just kind of...weird.

And weirdness really is the order of the day in "Self-Referential Traverse: zeitgeist and engagement". How else to describe the stop motion rat army? The magic sequence where the woman downstairs brings inanimate objects to life? The big climactic battle with a giant hose that rattles the neighbors and ends up coating everyone in foam? All of this is obvious sexual innuendo and the weird part is that the sexual innuendo is the least weird part of any of this. At least sexual innuendo more-or-less makes sense.

"Self-Referential Traverse: zeitgeist and engagement" is less film as it is an endurance test of patience. Is it worthwhile to watch one more scene just to see what bizarre idea Kim Sun comes up with next? It's not even morbid curiousity really. Podoli's wacky adventures aren't engaging so much as they are weird novelties. Given that Podoli himself is a weird novelty object it comes as little surprise that this is the prism through which he views the world.