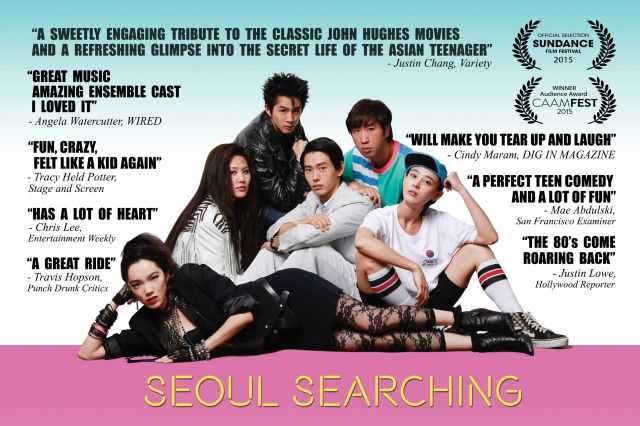 "Seoul Searching" is a John Hughes-esque teenage romcom that evolves through its one hour and forty-five minute runtime. Director and writer Benson Lee, who based the story on his own experiences in a 1986 Korean summer camp, serves up characters in the forms of teenage stereotypes that gradually take on individual personalities. The cast is made up of fresh-faced ethnic Korean actors from all over the world such as Korean-German Teo Yoo as Klaus and Korean-Spanish Esteban Ahn as Sergio. Joining them are Korean-American Justin Chon (Twilight, "Dramaworld"), Korean veteran actor Cha In-pyo, budding actress Kang Byul ("God's Gift - 14 Days", "The Rooftop Prince"), and Korean-American Jessika Van (MTV's Awkward). The disparate cast, although all of Korean heritage, reflects the core theme of the film, which is self-discovery. It is their mutual Korean heritage that brings them together, but their experiences that keep them that way. Welcome a film that sends a universal message of teenage loneliness via culture clash that results in human growth and understanding.

Director Benson Lee was sent to the Korean camp in 1986 by his parents in order to learn more about his Korean heritage, one that functioned on a strict social hierarchy not found in his native North America. The differences between growing up in the West and the social functions of the East clashed within him and all of the kids in "Seoul Searching". That intrinsic clash cropped up all over the film. Teachers found their students rude because the same Confucian reverence towards authority isn't a part Western cultures. Students suffered mental torment back home because of racial tension born of being Asian in a non-Asian country. One student acted nasty and tough towards the others because he was the only Asian kid in military school and had to learn to stick up for himself. Another felt like a failure because he didn't live up to his Korean father's standards of success. As the film unfolds, we learn about the kids, about Korean culture, and about how they learn to deal with the differences and find comfort in being with others like themselves. They were alike in their differences. The more they understand themselves and their discomfort, the more they understand their parents who had immigrated in the Korean diaspora after the split of the two Koreas. This added cultural element is what sets "Seoul Searching" apart from a John Hughes film.

The plot follows three roommates, Sid (Justin Chon), Klaus (Teo Yoo), and Sergio (Esteban Ahn), who suffer and encounter normal teenage issues like insecurity, confusion about sex, deviant behavior, alcohol. But as they and their campmates spend their time in Korea, they start to see into the lives of their parents and their history. The DMZ is a terrifying and real place that represents an ongoing issue; Japanese/Korean relations are still tight; adoption and location of birth parents is difficult. What makes this film so wonderful is the natural inclusion of these elements without making it seem like a forced education on what it means to be Korean, or an ethnic Korean raised in a different country. It is what it is. A human story about kids whose differences isolated them, but in the end, brought them together. During one scene, the Korean teachers are watching student protesters on television being horribly treated by the riot police, a huge '80s historical moment reflected often in Korean drama and film, most recently in "Answer Me 1988". Such an inclusion reflects the heartbeat of the Korean people, a peek into the history that defines them.

All of the major characters in the film are stereotypes: the punk-rock kid (Sid), the Madonna-figure (Grace played by Jessika Van), the Spanish Casanova (Sergio), the reserved German (Klaus). Near the start of the film the stereotypes hit hard and are overwhelming. But as individual circumstances peek through the campers' exteriors, they become endearing. Most of them do, but the trio of Run-DMC wannabes felt misplaced, and the heavy use of racial slurs was uncomfortable. Language use throughout the film was crude, but fitting of intoxicated, insecure, horny teenagers. It was the hard-hitting '80s soundtrack (Madonna, The Go-Gos, The Beastie Boys) and the costuming (Sid's chains and spiked hair, Grace's Madonna ponytail) that brought the time period to life. 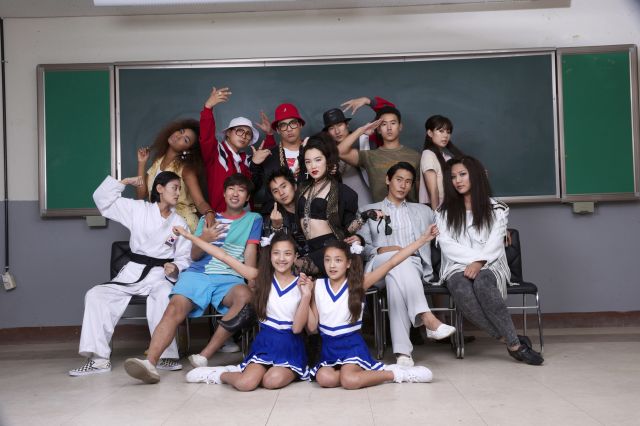 Moments of realization provide the heart of the film. Cha In-pyo, a sensitive and seasoned actor, plays Mr. Kim, the teacher of students who he can't quite handle, and who he can't quite understand. He learns as much about the world as his worldly students learn about Korea and Korean culture. His scenes with Justin Chon were especially powerful and tear-inducing in their raw sincerity as the two men talked about parental expectations and the heavy-handed results on the happiness and well-being of their children. Kris (played by Rosalina Leigh) is an adopted child who finds her mother and struggles with language and culture barriers at their reunion. The most powerful scene between Kris in her mother is without words as the two hold each other and cry. Klaus calls his father to thank him for everything that he gave up when leaving Korea, and everything he provided Klaus afterwards. Even the lighter moments of first loves, first kisses, first love-making, are small points of realization and growth for the characters. Director Lee doesn't just throw in sex, alcohol, or tears without a purpose. Each of those things reflects the kids, the times, and what it means to grow up. And they have nothing to do with their ethnicity - just with the fact that they're young people growing up. That makes the film universal.

Another hot point of the film is that it has an all-Asian cast. In a landscape where Asian actors in America are pigeon-holed into ninjas, brainiacs, or idiots, the film celebrates the diversity of Asians. They aren't just Long Duk Dong's or Annyong's. They are directors of films just like Benson Lee or Youtube stars like Esteban Ahn.

Benson Lee's "Seoul Searching" is a teen film with all the usual elements. But it is the inclusion of his story wrapped in fictional characters, his struggles depicted in well-acted scenes, and the inclusion of Korean culture that make the film special. Despite uniquely Korean elements, the story and struggles of students and teachers alike are universal and relatable. All audiences will walk away from the film and feel something - each person will have been able to relate with the angry Sid, or the shy Klaus, or the tough Su-jin. Watch the trailer for Benson Lee's "Seoul Searching" here or find it in North American theaters from July 22 to August 11.