[HanCinema's Film Review] "Shoot Me in the Heart" 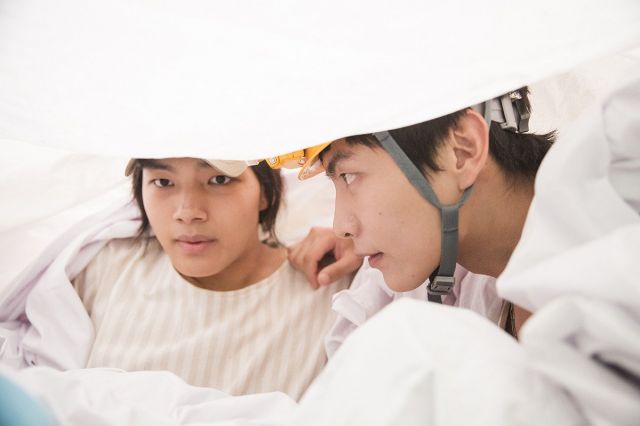 Soo-myeong (played by Yeo Jin-goo) is a sad, disturbed young man who's being sent to a mental institution for his own protection. Seung-min (played by Lee Min-ki)...well, it's some time into "Shoot Me in the Heart" before it's made completely clear whether Seung-min is actually crazy. Seung-min claims to be the victim of some sort of elaborate conspiracy. A single phone call is all Seung-min needs to produce someone who can vouch for his sanity. Of course, that's just what a crazy person would say, and we can't listen to crazy people. It's not like a sane person would react violently if they were forcibly restrained in a mental institution.

On the superficial level, "Shoot Me in the Heart" is a heartwarming comedy about brotherly friendship in adverse circumstances. And to be clear, it acquits itself quite well in these circumstances. Yeo Jin-goo and Lee Min-ki have excellent rapport in spite of their differences. Seung-min effectively manages to get Soo-myeong to open up and accept that the emotions and feelings he has aren't a danger. While Soo-myeong has had a tragic time of life, he is not a broken human being.

...You can perhaps see how, in the context of a mental institution, the sociological commentary is hard to ignore. Frequently we get the sense that it's not the inmates who are crazy, but the world. The underlying essential message of "Shoot Me in the Heart" is that friendship, emotional connection, and love are what people need to function. And yet the mental institution itself, an obvious metaphor for psychiatry at large, is really run more like a jail than a hospital.

To be clear, most of the inmates we see probably aren't well-suited to the outside world, and lack any real hope. But they're still people who deserve to be treated with dignity and respect. Seung-min's constant needling and provocation of the staff never comes off all that badly primarily because so many of them wield authority like bullies. It's hard to escape the impression that this is exactly the kind of environment that led to awful situations like what was dramatized in "Silenced".

"Shoot Me in the Heart" never dives down to levels that dark, though, as its content focuses on Soo-myeong and Seung-min primarily to forcefully proclaim that yes, hope is possible. Recovery is possible. And this can be achieved not through the machinations of the system, but by making the world seem like a less scary place. There's beauty everywhere for different kinds of people- you just need to find that beauty. Then you'll find the strength to move on.

If there's any weakness in the movie, it's that the characters are perhaps a tad too colorful, and the overall tone just a little bit too optimistic. "Shoot Me in the Heart" isn't aiming for realism, though- it's telling a story about how social bonds transcend simplistic categories like mental illness or mental health, and how people deserve the right to something more than endless misery in a cage. That's the emotional punch that gives so much resonance to the moment when Soo-myeong faces his fears. Life is only meaningful to the extent you have something to live for.

"[HanCinema's Film Review] "Shoot Me in the Heart""
by HanCinema is licensed under a Creative Commons Attribution-Share Alike 3.0 Unported License.