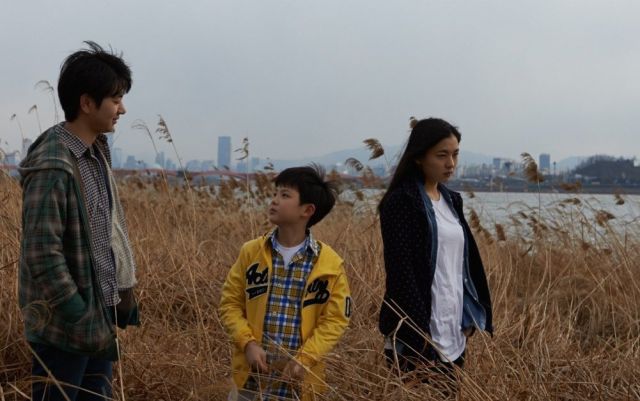 Min-jae (played by Lee Joo-seung) and younger brother Eun-ho (played by Kim Tae-yong-II) are abruptly abandoned by the older sister of their blended family, Eun-joo (played by Kong Ye-ji). After a year of living in poverty Min-jae finally stumbles onto a lead as to what happened with her. He then undertakes a belated road trip to locate his lost stepsister.

The road trip is the main immediate interesting element of "Shuttlecock". Far from being a zany adventure of discovery, again and again Min-jae is forced to confront the poverty and destitution of his shattered family, as he's barely able to scrape enough money together to make it to the next leg of the journey. This is decently subversive stuff all on its own, but what really takes "Shuttlecock" to another level of filmmaking is what happens when he reunites with Eun-joo.

We're treated to brief glimpses of flashback throughout the film where a grumpy Min-jae reluctantly goes along with Eun-joo's optimism in a sparkling dreamscape of youth. It's clear in these scenes that Min-jae is very uncertain about the future now that their parents are gone, but Eun-joo insists that everything's going to work out. She gives a very impressive, persuasive performance on the power of optimism that finally seems to thaw Min-jae's cold, mean exterior.

Now, we know from present-day Min-jae's attitude that this didn't work. And indeed, the very fact that Eun-joo abandoned her brothers in the first place is proof that she didn't actually sincerely believe in their familial bond. When Min-jae confronts Eun-joo, he's also confronting his worst fear. That maybe she did love them, but Eun-joo never actually trusted her brothers.

For what it's worth Eun-joo's reasons are understandable. At the same time, the fact that Eun-joo had planned to never tell her brothers what happened or even see them again is a horrific emotional strike against Min-jae. He thought that they were a family. Director Lee Yoo-bin brilliantly understands here what makes social isolation so horrible. Min-jae doesn't want love- he wants to give love, and Eun-joo took that chance away from him. It's a very harsh rejection that's even worse than a romantic rebuff, because it means Min-jae really truly is alone in the world.

In many ways this makes "Shuttlecock" a terrifying portrait a man's worst fear- that a woman, for all her platitudes and assurances, at the end of the day, just thinks that he's a toy to be discarded when it's time to move on to a different stage of life. Director Lee Yoo-bin delivers a coming of age message here that's astonishingly harsh, telling a familiar story of growing up from the other side of the looking glass. It's difficult emotional stuff that, even in the light of a somewhat upbeat ending, offers a chilling and effective sense of lingering fear.