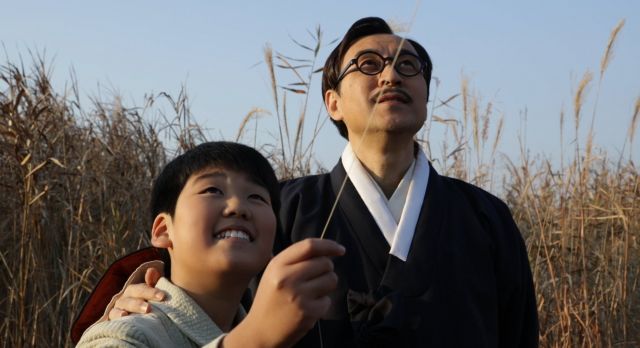 Father Joo Gi-cheol was a martyr for the Presbyterian faith during the Japanese Occupation of Korea. The specific crime that warranted his torture and eventual death was activism against the practice of Shinto shrine worship. That might not sound like much on its own, but straight up worship was going farther than was warranted by a Biblical creed of render unto Caesar what is Caesar's. Father Joo Gi-cheol saw on a daily basis how the so-called godly figure of the Japanese Emperor could not provide for Korea. Though willing to work within the system to an extent, for Father Joo Gi-cheol, idolatry was the last straw.

But "Single Determination" takes its time getting into that subject. First and foremost, Father Joo Gi-cheol is presented as a man of God who rejoiced in the simple pleasures of life, like delicious food. No joke- director Kwon Yeok-man treats every shot of food as bounty of the heavens. Whether this is a feast at divinity school or rice doled out to orphans, it's the pleasure of sharing and partaking that strikes the mood.

Though essentially a documentary, "Single Determination" relies heavily on reenactments to make its point. This is rather by necessity, since all the people alive who knew Father Joo Gi-cheol are quite old today, as we see from the interviews. And as is to be expected from a production developed by and directed toward a religious audience, the production values aren't all that great. Simple piousness and compassion is emphasized over deeper character traits.

Which makes sense. The New Testament itself is relatively little "Jesus doing stuff" and mostly "people talk about how great Jesus is for doing stuff". Father Joo Gi-cheol eschewed flashiness for the sake of doing good. In a world where collaborators hoarded wealth, Father Joo Gi-cheol and his wife were content to slowly trade away long-term financial security for the sake of providing a spiritual community for those who needed it.

Archival footage is also effectively spliced in. The pro-Japanese war propaganda in "Single Determination" utilizes limited colorization for the sake of showing off uniforms, flowers, or national symbols in the name of the Japanese Empire. There's something eerily glorious about these sparks of life in black-and-white newsreels, yet as Father Joo Gi-cheol demonstrates, true glory and inner peace can only come from faith in God.

While that's a fairly corny moral thrust, I can appreciate the sentiment. In a Korean film environment where "DongJu, The Portrait of A Poet" celebrates independence by showing the suffering of a basically wishy-washy protagonist, there's something rather bold in the way "Single Determination" proudly states that Father Joo Gi-cheol was a man of God, who derived his power from God, and even if the torture was miserable Father Joo Gi-cheol was willing to suffer just as Jesus did, with no hope of salvation from any save God Himself. While to some extent that's just preaching to the choir, "Single Determination" did effectively convince me that Father Joo Gi-cheol was a man worthy of emulation.