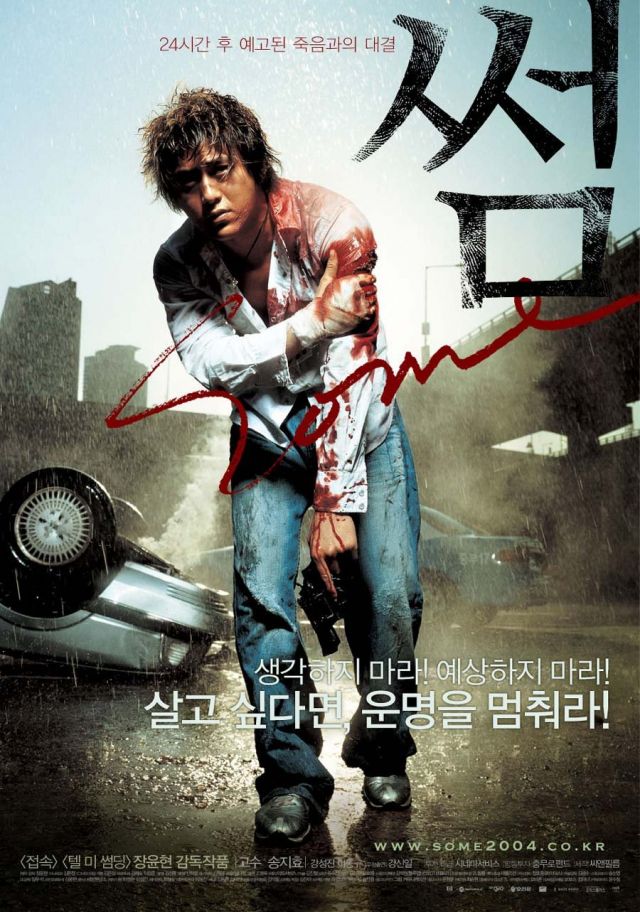 A drug deal has gone bad, and local gangsters find themselves unexpectedly pursued by big-name mafiosos from Busan. The police, spearheaded by detective Seong-ju (played by Go Soo), must reach deeper and deeper into an investigation that consists mainly of lots of driving. And throughout all of this, traffic reporter Yu-jin (played by Song Ji-hyo) is having unsettling visions, as if she has lived this day before.

There's a lot going on in "Some". Take the drugs. Drugs are a very important part of the story. Much discussion is made of hoodlums too hopped up on drugs to function well. The Busan gangsters are principally concerned with acquiring very valuable drugs. Mysterious overdoses pop up all throughout the story. And there's Yu-jin, too- who's only involved with the story at all because she has a party buddy who's a member of the local gang. The question soon becomes apparent as to whether these strange drugs have anything to do with her strange symptoms.

Actually, there's never any explanation given for the source of Yu-jin's strange visions. It's just something that happens. Most of "Some" can be summed up in the exact same way. While there's a great deal of dense material and questions, almost none of it has anything to do with anything else, and on the rare opportunity the movie does take a moment to try and explain a connection, it comes off as cheap and irrelevant. The true villain isn't clearly identified until some time into the movie, and once this happens most of the rest of the cast just disappears without explanation.

"Some" makes the unfortunate mistake of adhering to individualist movie logic. The final confrontation is deliberately set-up in a way that requires multiple characters to either refuse help or at least not try to obtain any. Many decisions are made that don't take into account how people actually think. One surprise is deliberately set up, for example, but makes no sense in context given that (in-story) several hours have elapsed. I can't even give credit for the notion that it was a deliberate plan, because many more obvious and sensible plans were discarded in order to give a very bad one playing space.

Still, even all of this might be forgivable if the characters or action were interesting- unfortunately they're just not. The driving scenes, even in the context of a chase sequence and pile-ups, are terribly boring and pedestrian. There's no sense of style- a bit of self-parody would be welcome here, but the movie is so wrapped up in its own dull plot that it never aspires to anything more impressive than just going through the motions. It's just plain lazy, both in vision and execution.

I like the little character moments. The scenes where Yu-Jin is doing actual traffic reporting are fairly interesting, and she has an attitude befitting a woman who wakes up before daybreak to cheerily talk about current driving conditions. It's a good concept- but a thriller is in very poor shape when the best compliment I can come up with is "has good traffic forecasting". Especially when, like so much of the movie, Yu-jin's job has barely anything to do with the actual story. Stay away from "Some". It's only worth watching as a case study to see how many ways a movie can go wrong.

"Some" is directed by Jang Yoon-hyeon and features Go Soo, Song Ji-hyo and Kang Sung-jin.

"[HanCinema's Film Review] "Some""
by HanCinema is licensed under a Creative Commons Attribution-Share Alike 3.0 Unported License.