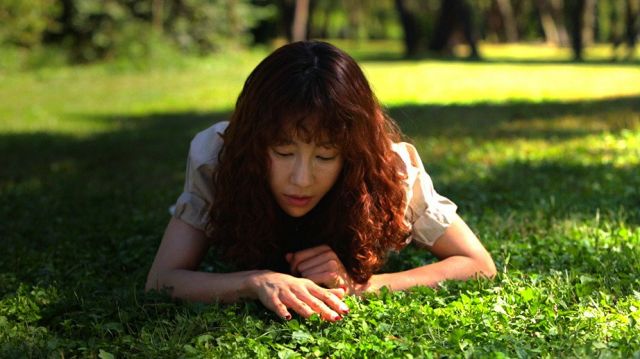 Sook-hee (played by Chae Min-seo) is like a living incarnation of Freud's hypotheses about sex. She's extremely sensual and sexual, yet goes to great pains to establish herself as a mother. Seok-hee insists that her catatonic patients think of her as mom, even as they're physically incapable of actually calling her that. Moreover, Seok-hee is actually the mother of a baby who she still breastfeeds in a very sexualized way. At first I thought this was just my bias as a man. Then a couple of scenes later, well, that matter's cleared up beyond all doubt.

Reading all this you might be inclined to think that the character of Seok-hee is meant to be portrayed ambiguously. "Sookhee" is an exceptionally strange film, certainly, and seeing the way she acts at home and work it's difficult to imagine that this is a woman who's supposed to be inspirational. When Professor Yoon (played by Jo Han-chul) comes under her domination, it's difficult to escape the sense of real fear.

Unfortunately that was probably just my bias as a man talking. Professor Yoon undergoes abject humiliation under Sook-hee's care, and the worst of it is that she clearly means well. Sook-hee assumes that Professor Yoon must want certain things since she knows that he is a professor and also a man. Since Sook-hee's only understanding of Professor Yoon is as the surrogate mother to a man barely capable of moving, it's easy to see how she could have made such a mistake.

But then that's the problem with this movie. Sook-hee does not, in fact, make any mistakes. I mean that in terms of narrative logic. Let's be clear- Sook-hee commits several crimes over the course of this film. And not light-hearted ones either. If the genders were reversed and Professor Yoon was a sexually uptight woman whereas Sook-hee was a free-spirited man...well, let's just say I would not be describing her with the words free-spirited.

The only saving grace to any of this is the possibility that director Yang Ji-eun intended this ironically. She's not actually saying that that the lives of these characters were significantly improved because they were the victims of sexual assault and rape. No, it's entirely possible that the characters are incorrect in assuming they've grown as people because of this experience. That they really underwent trauma, and the short-term thrills of the sexual titillation aren't going to make up for the inevitable crash.

Unfortunately this conceit is almost impossible to take seriously in the context of the ending, where Sook-hee herself practically monologues about the mysteries of life and how they can take us unexpected places. The message is a repugnant one, existing in that bizarre overlapping space between misogynist pornography and radical feminism. The only positive statement I can make about "Sookhee" is that it kept me going for awhile. For most of film I genuinely thought we were going to get some sort of catharsis, some sort of acknowledgment about how everything has gone so horribly horribly wrong. Sadly, it just wasn't meant to be.