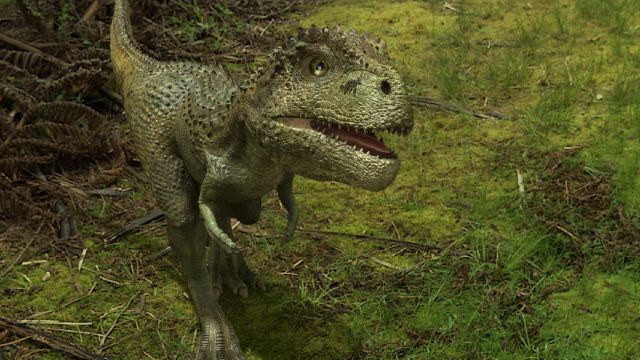 The lead character of "Speckles: The Tarbosaurus" is a young tarbosaurus named Speckles. While Speckles has a voiceover (Lee Yeong-seok as a child, Shin Yong-woo as an adult), none of the other dinosaurs have human voices or even names. With this, "Speckles: The Tarbosaurus" is refreshingly free from anthropomorphization more obnoxious children's movies are more well known for. We watch Speckles from the dinosaur's point of view.

So while there might be a gruesome moment every so often where we watch a predator kill a prey dinosaur, this is always put in proper context. Carnivores are hungry, so they eat herbivores. Or possibly other carnivores, when the situation calls for it. There's no malice. Well, I mean, Speckles does carry a lifelong grudge against the evil T-Rex who predictably murders his family, but even this is in the biological context of how said T-Rex wanted to wipe out the predator competition.

And how this happens is also noteworthy. While nowhere near human intelligence, the dinosaurs in "Speckles: The Tarbosaurus" show themselves as being capable of manipulating their environment. Say, by pushing down rocks, or maintaining sense memory as to where dangerous tar pits are located. These dinosaurs are smart, but not especially calculating. Which means that outlines of a plot notwithstanding, "Speckles: The Tarbosaurus" mostly comes off as a nature documentary. Just, an obviously 3D animated one.

Another strong point is in how fast most of the confrontations are. If you're a dinosaur, you don't really want to get into a long drawn-out fight because that increases the risk of a serious injury. Likewise, when Speckles is a small, adorable, and obviously outmatched baby dinosaur, the only rational response to any dangerous situation is to escape. This is true even when he is obviously hungry. When in doubt, act fast, run away and live to die another day.

The effectiveness of these more punchy scenes is only made obvious by the weaker slow ones. I'm thinking in particular of the final confrontation with the velociraptors, which goes on endlessly and is informed less by what is the more rational act from the dinosaur point of view and more by writer/director Han Sang-ho trying to wring out the maximum emotional impact from the scene- and it just doesn't work. The previous, much shorter scene felt far more tragic just because we could see the obvious limited dinosaur logic at play trying to figure out at what point rescuing a loved one just isn't worth the effort.

That's a fairly heartless way to attack the movie's most emotional moment, but then that's the thing. "Speckles: The Tarbosaurus" does not work as an emotional plot. It works as a dinosaur documentary told through the framing device of a single dinosaur's life journey from cute little dinosaur to big scary dinosaur. Also the fights are pretty rad- again, always managing to be just short enough to leave me wanting more, with that one previously mentioned exception. Will anyone actually learn anything from "Speckles: The Tarbosaurus"? Well, probably not, but the movie's pretty fun all the same.

"Speckles: The Tarbosaurus" is directed by Han Sang-ho and voiced by Lee Hyung-suk, Shin Yong-woo and Goo Ja-hyeong.

Available on Blu-ray and streaming from YESASIA and Amazon