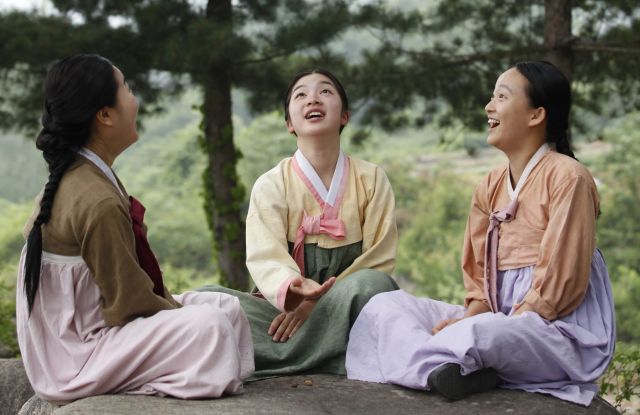 During the Japanese Occupation of Korea, Jeong-min (played by Kang Ha-na) and Yeong-hee (played by Seo Mi-ji) are mostly unremarkable teenage girls who live in the countryside with their parents. The prospects of the young women take a radical turn in 1943, when Japanese soldiers arrive looking for sources of comfort to comrades stressed out and rendered borderline insane by the neverending war in the Pacific. Insanity proves to be a recurring theme in "Spirits' Homecoming", as Jeong-min and Yeong-hee struggle to avoid it.

It's all too easy to compare "Spirits' Homecoming" to "Love, Lies". Their flash forwards even take place in the same year, 1991. But whereas "Love, Lies" gives us an embarassingly goofy-looking Han Hyo-joo in old person makeup, the future version of Yeong-hee (played by Son Sook) still suffers nightmares from her experiences, and is only able to briefly find respite through wanderings in the spirit realm where young exorcist Eun-kyeong (played by Choi Ri) happens to be a natural at locating and comforting souls left adrift in the realm of the living by material madness.

Really, the main strong point of "Spirits' Homecoming" is just how deadly serious it is. No real attempt is made by writer/director Cho Jung-rae to develop a coherent plot, because people don't lose their marbles by living coherent lives. Indeed, it is only when the girls start to give up any hope of resistance that their mental state truly starts to degrade, reduced as they are into being passive receptacles for mindless rage, rather than living breathing humans with their own thoughts and feelings.

Even an escape attempt is significant precisely for managing to come mostly out of nowhere, because that's how successful escapes usually work. The key is not excessive forethought, but rather taking advantage of the right opportunity. One of the main disturbing aspects of the camp is just how thoroughly well-designed it is. Proper planning is such that the schemata is a regular assembly line where even the doctors have become curiously blasé by the constant routine.

It's from this context that I never really saw "Spirits' Homecoming" as significantly anti-Japanese, because as horrible as the camp is, the crimes being committed never really come off as all that personal. The backdrop is one where soldiers are (or at least supposed to) follow orders mindlessly so as to insure that matters are done the "proper" way. Good reflexive strategy results in military victory. Sloppiness does not do so well by comparison.

"Spirits' Homecoming" is dark, moody, and at times incomprehensible. Yet for these failings to hit a proper narrative arc, the film succeeds where it matters when it comes to providing an effective sense of empathy and fear. This is how writer/director Cho Jung-rae was able to muster the strength of over seventy five thousand crowdfunders. "Spirits' Homecoming" is an accurate, haunting reflection of a time plenty of people would just as soon forget, told from the vantage point of those who can only wish the nightmares will go away.