[HanCinema's Film Review] "Stand By Me" 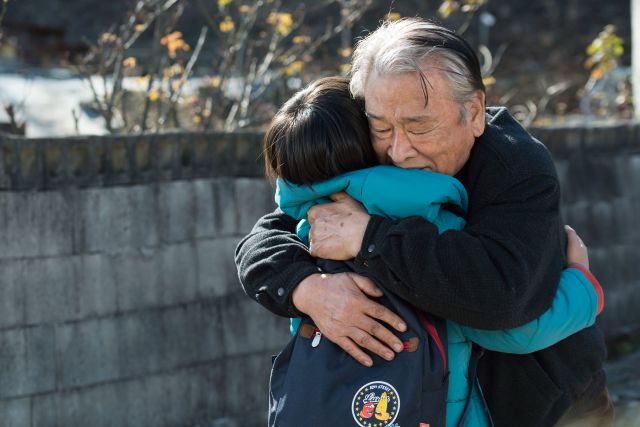 Deok-goo (played by Jung Ji-hoon) is an elementary school student who's still reeling from separation anxiety. His father's dead, and his mother's been chased out of the house. The latter is the fault of Deok-goo's grandfather (played by Lee Soon-jae), who loves Deok-goo dearly, but is old enough to realize that he isn't really a feasible sole long-term guardian for a child as young as Deok-goo, even if his birth mother is Indonesian.

That last fact ends up not being so important as I was expecting. Which is fine by me. "Stand By Me" takes place in rural Ansan. It's not a place where anyone can afford to be picky about whatever women are willing to live there. And besides that, long before we find out the cause of the rift between Deok-goo's mother and grandfather, we see Deok-goo's grandfather having a friendly conversation with a very pregnant Vietnamese woman. Incidentally the actress who plays Deok-goo's mother is actually Filipina, if that distinction is important to you.

More than the technical dimensions to the racial politics I was disappointed that Deok-goo's mother did not get more screentime. I was a bit flabbergasted that the ending does not actually show Deok-goo's mother reuniting with her children onscreen. One of the movie's great highlights is showing the ways in which Deok-goo and Deok-hee (played by Park Ji-yoon-II) are stressed out by the absence of their mother, and how this heightens tensions with their peers.

All in all this makes for a very ambiguous and impressive family dynamic. "Stand By Me" is very honest about the ways in which children can be very frustrating- and the children themselves are quite aware of this too. That's why we can see them internalizing feelings of guilt about how they must somehow be at fault for their mother leaving. The truth, about how the rift was caused by the stubbornness of their grandfather, is equally difficult for them to place because they cannot see their grandfather as a flawed adult.

When Deok-goo's grandfather sorts out his feelings with a trip to Indonesia to get a better idea of what his daughter-in-law did and why...well, without getting too much into spoilers, I can definitely tell you that Deok-goo's grandfather finally realizes that he is not alone. That his daughter-in-law did not just give him grandchildren. She gave him a family, which means that none of them need to suffer alone. They can get strength from each other, and that matters more than any individual spat.

"Stand By Me" is directed by Bang Soo-in and features Lee Soon-jae and Jung Ji-hoon.

"[HanCinema's Film Review] "Stand By Me""
by HanCinema is licensed under a Creative Commons Attribution-Share Alike 3.0 Unported License.