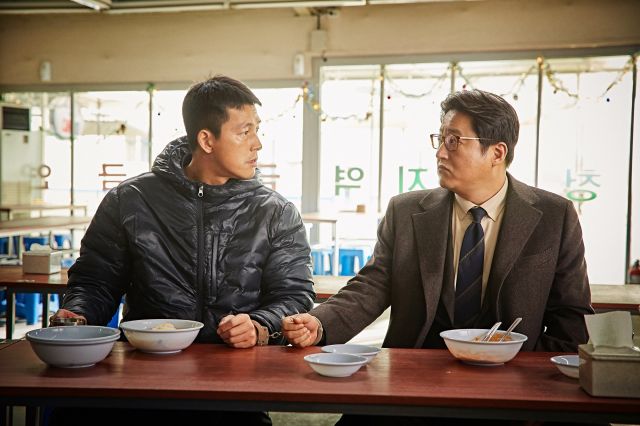 Cheol-woo (played by Jung Woo-sung) is a North Korean tough guy with a secret mission. Cheol-woo quickly realizes, to his horror, that the mission is being witness to a massive terrorist attack that appears to have been coordinated by an American helicopter (!) working together with rogue North Korean military forces. Unsure of who to trust as he tries to salvage the disaster, Cheol-woo's mission takes him deep south, where he ends up meeting the South Korean Cheol-woo (played by Kwak Do-won), who also works in government.

The extended opening setpiece to "Steel Rain" is so tense and excellent it's actually a bit of a letdown when the two Cheol-woos finally team up. In the first place they only really get one long sequence to get to know each other very well. In the second place the longer "Steel Rain" goes on the less obvious it is that either Cheol-woo is really all that important in the big picture.

Remember that American helicopter? When I saw that, I was expecting that the Cheol-woos were going to have to uncover a huge conspiracy that was going to involve not just rogue elements in the North Korean government, but the South Korean and American governments as well. Instead, the helicopter's participation is dismissed as a random mistake, even as various American characters show suspicious opportunism in the wake of the attack, most of which revolves around thinly veiled excuses to start a war.

This is especially awkward when we consider that the motives of the North Korean coup d'état are not clear for most of the movie. Contrast that with how the American characters are constantly engaging in bloodthirsty rhetoric, to the point I was rooting for the North Koreans at the big missile launch. Why? Because we didn't actually know what the North Koreans were trying to do, while the Americans had just explicitly said they were going to start a war.

I can admire what director Yang Woo-seok is trying to do in spirit. "Steel Rain" is, for all its action movie bluster, the rare project that tries to address the prospect of a North Korean coup d'état realistically. Far from being a magical solution, such an event would create so many unknown variables that trying to prognosticate how it could play out is a fool's errand. The insistence on the part of one American character that they've run, like, a billion simulations and know exactly what to do is fantastically unconvincing even in context.

But again, such events have very little to do with either Cheol-woo, such that there are long stretches where neither protagonist is on-screen. Half the time "Steel Rain" wants to be about their story, and the other half of the time it's trying to be a sober reflection on the inherent chaos of war. While consistently excellent in individual sections, the ambiguous genre mix of "Steel Rain" does a lot to dilute the impact. The non-ambiguous division of characters into good guys and bad guys doesn't do the film any favors either.