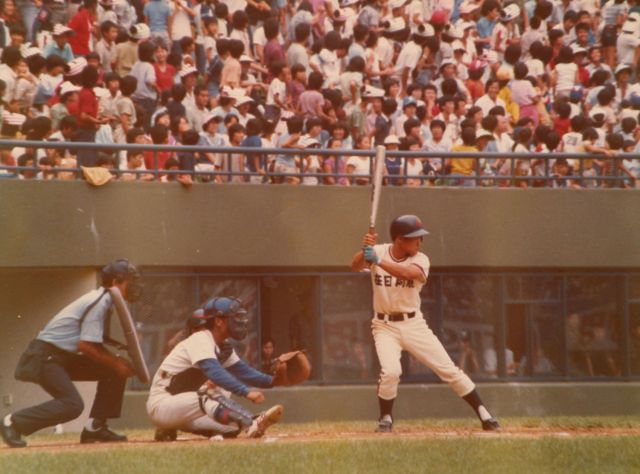 Every year, high school baseball teams from all over Korea compete in a huge national bracket. If you don't think that sounds interesting, well, I don't blame you. Most people don't really pay attention to high school sports after they leave high school unless their kids are involved. So what's the gimmick that "Strangers on the Field" uses to justify a feature-length documentary? Well, like last year's "One for All, All for One", the protagonists are not Koreans, exactly, but rather Korean-Japanese. And once upon a time they, too, could compete in the tournament.

...Still not feeling too excited? Again, that's understandable. "Strangers on the Field" is almost completely lacking in the kind of relevant, forceful energy that seems necessary these days for a documentary to be particularly noteworthy. There's no deep, insightful commentary on the nature of the human condition. For the most part, the documentary's kind of like listening to a bunch of family uncles reminiscing about the good old days.

The interesting subtext behind all of this is that the men we see profiled are, in fact, the very epitome of multiculturalism. They're perfectly bilingual and, as the title implies, actually felt a little awkward coming to compete in Korea because even if their home life was Korean, their social life was frequently Japanese. And that's not even getting to the North Korean question- the main reason Japan still has a sizable Korean minority is because to this day political issues make a return to Korea somewhat impractical. Consequently, these ballplayers mostly just ended up blending into the general population.

Kind of an odd point to consider, given the trouble that Director Kim Myeong-joon had to go through to locate them. In most appreciable ways "Strangers on the Field" is just a novelty. What are Koreans like, who've had to spend their whole lives in Japan? What did they think of Korea when they finally did get to see it with their own eyes? Are the people and the situations really all that different?

Well, not really no. And in this way "Strangers on the Field" does manage to make an interesting, if probably inadvertent statement on the way modern culture tends to fetishize multiculturalism. These guys, these ballplayers, they really just don't think about this stuff unless it directly affects them in some way. We can't even say they've really come to terms with their identities as Korean-Japanese, because from their perspective, it's not really that big of a contradiction.

But by and large the tone of the documentary is pretty steady. While the story of the baseball tournament is mostly just an interesting anecdote, there's something imminently reassuring about the simple tone of it all. There's a kind of casual, friendly humanity in these stories that's very comforting, very down-to-earth. Can I recommend it..? Well, to the person who expects pomp and flash in their movies no not really. But I definitely felt rather reassured leaving the theater on this one. "Strangers on the Field" is a tribute to the glory days, without the obnoxious pretentiousness that phrase usually implies.

"[HanCinema's Film Review] "Strangers on the Field""
by HanCinema is licensed under a Creative Commons Attribution-Share Alike 3.0 Unported License.