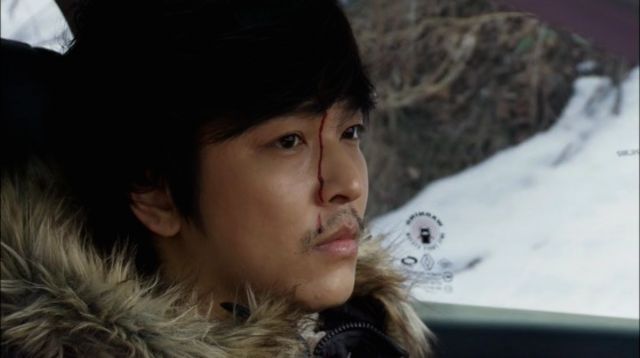 In the spotlight this week: Ha Won-joon's "Stray Dogs"...

Having recently returned to Kang Woo-seok's stunning adaptation "Moss", I was eager to catch "Stray Dogs" (2014) and see how this debutant tackled this popular thriller setting and to what effect. Watching Ryoo dodge and decrypt Cheon's almost watertight grip on his small rural village was, indeed, thrilling, because we never really felt comfortable that our hero would escape with his life or the answer he sought. "Stray Dogs", however, is no "Moss", and despite its sound premise and sneaky set-ups, the film flopped (attracting less than 1.2K admissions earlier this year) and failed to fully adrenalize much of its plot as dreary exposition, manic misogyny, and poor character convictions put this dejected dog down before we even suspected it was sick.

Kim Jeong-hoon plays a city reporter (So Yoo-joon) whose car breaks down in a "crimeless" village (according to the town's proud sign) in search of his friend who recently went missing. Yoo-joon is meet by a small contingent of town elders who switch between xenophobic conservatives to strange Samaritans of some or other degenerative ilk. They hesitantly host our hero for a few nights while his car is being worked on, during which he slowly starts to suspect these middle-aged men are not as honest or welcoming as they would like him to believe, and know more about his missing friend than they're saying.

While navigating this town's snowy rural paths, Yoo-joon spies a young woman (Cha Ji-hun). This beautiful, and seemingly anatopistic, creature appears well out-of-place around all these elder countrymen, and Yoo-joon soon discovers that she is a long-time resident who inadvertently became the sexual plaything for these perverted and pathetic men. This 'crimeless' countryside hellhole eventually becomes an all-out abattoir as Yoo-joon and his nyctalopic damsel in distress try to escape these feral vultures and their animalistic atrocities; a chase that, while absolutely redemptive, plays more like a dreary dénouement than the film's climatic catharsis.

"Stray Dogs" is, as best, cynical and stale; and at worst a misogynistic mess ladened with endless exposition and creaky hinges. The women in the film, for example, are passive objects of sexual gratification, soft serve souls who are subjected to rape and ridicule by the hands of wild men and their animalistic needs (despite the 'Bedevilled' bash at revenge later on). The men, too, are cartoonish manifestations of unchecked libido that lack depth and dimension. From the power-pushing foreman to the sickeningly slick loan sharks that hound Yoo-joon back in the city, the film seems to what to mimic the richness of "Moss" without the solid literary and character-driven richness that helped structured Kang's rural epic.

Ha Won-joon's "Stray Dogs" is a disappointing break that had the potential to be pleasing, but serious squandered it chances by betting on stale characters and a stagnant story with little up its sleeve. There are no surprises here at all, no intrigue or sustainable desire to know that might have got the blood pumping; such lacks are quite obviously crippling for a thriller, but hopefully for Ha Won-joon the road to recover will be short and swift without any further breakdowns.