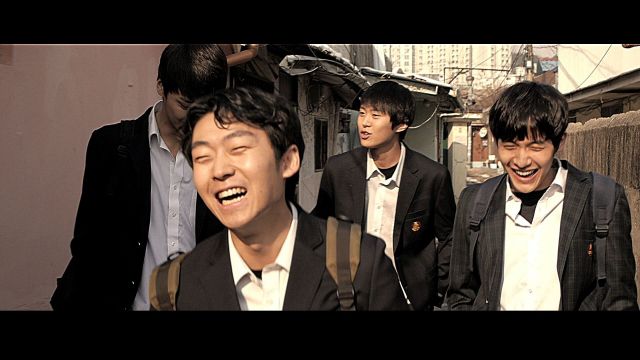 Yoon-seok (played by Maeng Se-chang), Sang-woo (played by Gong Myung), Won-seon (played by Lee Tae-hwan), and Ho-yeong (played by Lee Jin-sung-I) are four friends living in the squalid neighborhood of Susaek. You know, I lived in Susaek for awhile. It wasn't the most photocentric high-living neighborhood, but it wasn't a mess of official corruption and violent teenagers either. Granted, "Su Saek" takes place some fifteen years ago, so who knows, maybe the situation has improved since then.

And yes, that is the title. "Su Saek". Whoever was responsible for that abomination is somehow not familiar with the way Korean place names are normally formatted in English. It is not "Su Saek", any more than Gang Nam is a district in Seo Ul. That much should also have been obvious from the Korean title, which literally translates as Susaek Station, a name which makes substantially more sense since among other things, it indicates that the movie happens in a specific location.

...The movie, right. Well, the short of it is that the four friends start making increasingly bad decisions, especially Sang-woo. The crux of their relationship is defined by boozing, overreaction, and generally just treating each other like garbage for fun. If you can ignore the inherently toxic nature of these interactions it is easy to see how these guys are friends. They share with each other a general contempt for decent behavior, less because of actual animosity and more because they lack useful authority figures.

Where "Su Saek" is at its most interesting is when exploring how impulsive teen behavior is bad, since all it takes is one liquor bottle to seriously hurt a person. In contrast to standard gangster clichés of a guy being so tough he won't die even if you kill him, violent actions in "Su Saek" have serious physical consequences. It might feel satisfying to let loose some anger or feel a woman up in the immediate sense, yet around every corner awaits inevitable disappointment.

Unfortunately this visualization of actions having tangible consequences which can't be resolved by punching more people in the face is most of what "Su Saek" has going for it. I haven't described the characters much because there isn't really that much to describe. While Sang-woo has the worst anger issues, by and large the teenagers have very similar personalities and the terms which dictate the disintegration of their relationship are mostly by circumstance. Had someone else gotten the job and someone else gotten jealous, "Su Saek" would have mostly been the exact same movie just with the various actors in different places.

It's tough to identify with characters who lack much in the way of distinguishing character traits. This is especially true considering they're all such generally unpleasant young people their fate seems somewhat inevitable. Note the first response they all have to the car accident which starts the story off...well, what more is there to write except that they were never really very good best friend material to begin with?