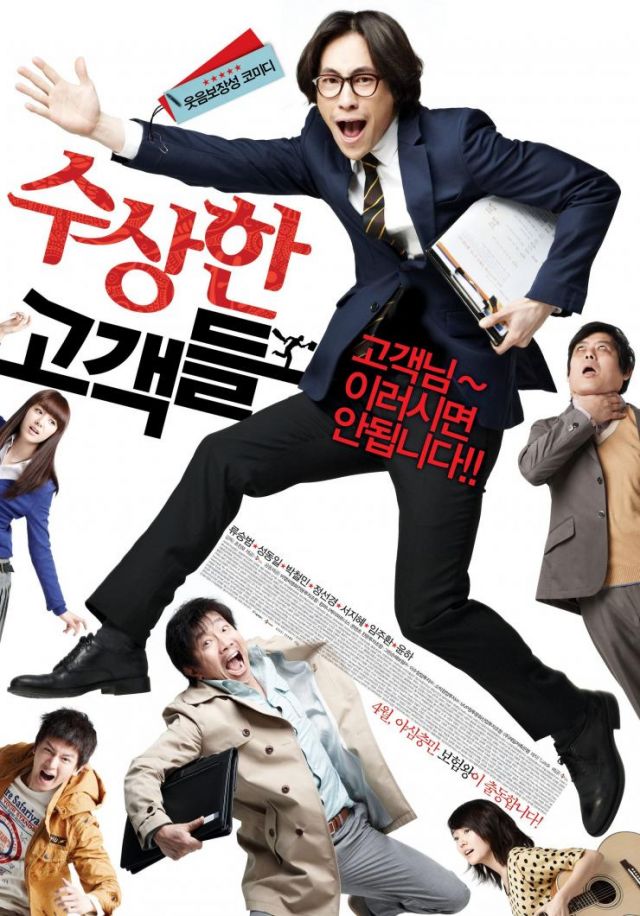 Jo Jin-mo's "Suicide Forecast" was released back in April and pushed its ticket sales just over the million mark during its run at the Korean theatres. The film boasts Ryoo Seung-bum as its leading man in a surprisingly intense drama accented with light comedy to keep it from slipping too deep into its worrisome commentary on suicide, consumerism, and social apathy.

Korean cinema continues to surprise me with the manner in which films of this genre are marketed and presented. The comedy-drama genre in Korea is approached with such seriousness that one's expectations are continual challenged to the point of being uncomfortable. Few moviegoers walk into a cinema blindly, without any presuppositions as to what the spectacle will hold for them emotionally. Film's such as this challenge any pre-viewing expectations to the point that one might even feel lied to or trick in some way. This, however, does not taint the films overall affect on dealing with subject matter that has real cause for concern in modern Korean society.

Korea has one of highest suicide in the world and as such this film really attempts to dive into unearthing some of the social perceptions surrounding this disturbing national crisis. Contemporary societal issues such as consumerism, urban isolationism, corporate social responsibility, threats to the family structure, and social apathy are considered in the film in such a way that humanises the struggles of individuals as they tackle these issues and attempt to overcome them through collective nurturing and understanding.

Ryoo Seung-bum plays an insurance salesman named Bae Byeong-woo on the rise in a competitive insurance company. He is driven and devoted to advancing himself within the company but his professional gains are challenged when he inadvertently assists a client to commit suicide by informing him of both the requirements and pay out of his current policy. The unwanted attention he gains from the police as well as an upcoming tax audit forces him to recall three individuals that he allowed to signed up for life insurance despite having a record of attempted suicide. These three individuals, along with one of Bae's close friends, become a huge concern for him as their deaths would reveal his poor choice to allow them to acquire a policy, a revealing that would result in his own professional demise.

The film will have you questioning where exactly the comedy lies during the first thirty minutes or so as the dark subject matter hits home early and Bae Byeong-woo's superficial consumerism is being framed. The first sign of it is a combination of toilet humour and slapstick music that accompanies Byeong-woo as he missions to find the first of his suicide clients. This felt jarring at first and while I appreciated the film's early construction and set-up, it was at this point that I had to question the film's handling of the material and address my own cognitive dissonance as the film's tone felt out of sync as it moved into a new tonal territory. However once the director had re-established this new tone it was very well balance, swinging between real empathy and ice breaking laughs with ease.

"Suicide Forecast" addresses strong social issues occurring in contemporary Korea and felt surprisingly grounded and unforced. This was mainly due to thematic and tonal considerations rather than the plot itself. The actors mirrored this as performances where strong, tangible and all too relatable to the struggles we feel in ourselves and seemingly suppress in others. "Suicide Forecast" offers a relatable story that exposes some of the harsh oversights we subvert in our daily lives and magnifies the individual as a product of social apathy. I enjoy the film and not just because I am a fan of Ryoo Seung-bum, but because it challenged my perceptions on genre and surprised me throughout its journey by humanising a struggle all too many suffer with.