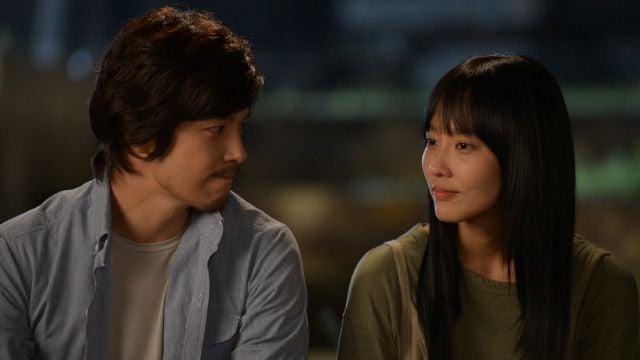 Seol-ji (played by Dana) is a North Korean defector living in the South. Her days are filled with nothing all that remarkable. Seol-ji works in a flower shop with another defector, fulfilling the sometimes bizarre requests of people who order flowers. She also paints as a hobby- this being the profession of her old life in North Korea. Life isn't amazing- but it's not terrible either. Seol-ji has enough money to get by. Which is why she bristles at Sin-woong (played by Kang Eun-tak), an ambitious director who thinks Seol-ji has exactly the right story for a compelling television documentary.

Where "Sunshine" works best is at atmosphere. Generally speaking the characters are charming, and the social commentary, while slightly buried, is hard to ignore. Sin-woong constantly tries to repackage Seol-ji's artwork as something more obviously compelling. Ironically, it's Seol-ji's training in the North Korean propagandist style that makes her work interesting- and conforming to pop art standards just makes it hard to tell whether her work is supposed to be a parody or what.

The problems show up, well, almost everywhere else. There's really three stories at play in "Sunshine"- there's the whole documentary storyline. Then there's Seol-ji's old life in North Korea and the question of how she escaped. Then there's a romantic subplot between Seol-ji and Sin-woong. This might not seem like a lot, but because these three stories have nothing to do with each other it oftens feel as if there's a competition for space. The romantic subplot in particular is so underdeveloped it could easily be removed with no consequence to the overall product.

The end result is a movie that's not really all that bad, but I really wish that director Park Jin-soon had just picked one element and made that the primary focus. Among other things this would have fixed some of the awkward structuring issues. A big plot twist is accidentally ruined by a midway dream sequence that got me asking questions about certain characters I probably would not have asked myself had Seol-ji's mental state been explored in a different, more coherent way.

Still, there are some good points in the subtlety. The political questions regarding North Korean integration into South Korean society, as well as the interpretative issues regarding pop art are lightly discussed. This makes sense if we consider the position that Seol-ji is coming from. She doesn't necessarily think about North Korea all the time, nor does her artistic training really go that far beyond what was needed to draw communist propaganda posters.

This is light praise, but mainly that's a function of how I didn't really hate "Sunshine" all that much. For all the general muddled scripting, I did want the characters to succeed, even if it was obvious by the end that neither Seol-ji nor Sin-woong have the talent necessary to achieve greater ambitions than what they already have. Whether this was actually the intent of director Park Jin-soon I have no idea. At the very least "Sunshine" did manage not to personally offend me, so that's something.