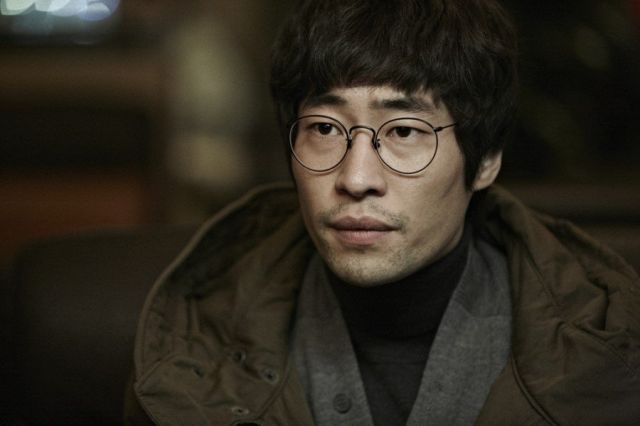 It's hard to cast a sympathetic light on a psychopathic killer, let alone keep it lit. In Pang Eun-jin's "Suspect X" (2012, aka "Perfect Number") Ryoo Seung-bum was the subject of that searchlight, playing a mild-mannered analytical genius/creepy stalker. The film was adapted from the Japanese novel "The Devotion of Suspect X" (2005), and marks the third instalment in Keigo Higashino's "Detective Galileo" series. In it Seung-beom plays Seok-go, a cunning voyeur who is infatuated with his beautiful neighbour Hwa-seon (Lee Yo-won). That fantasy of love quickly twists into a calculated invention when he hears murder through the walls one night.

Hwa-seon lives alone with her young daughter Yoon-ah (Kim Bo-ra), both of whom were involved in the murder of a sleazy uncle with a debt to collect and rape on his breath. Before Hwa-seon is able to bring herself to confess to the police, Seok-go comes to party to cover-up the crime. He softly instructs Hwa-seon and Yoon-ah through the police's persistent probing and questioning, they do well as planned. However, his efforts start to unravel when the lead detective on the case turns out to be an old school friend (Cho Jin-woong as Min-beom). His good intentions also get tested when a mysterious man steps, not undetected, into Hwa-seon's life, allowing jealousy to infect Seok-goo's carefully considered scheme.

It's no surprise that given the source material for "Suspect X" the film is convincingly grounded in its own telling. Recently the Korean films that have flickered passed my eyes have been rather slack in this regards, but here the film's flesh-out characters and the conciseness of events speaks to the award-winning story Bang was working from. Tension develops in the film from the triangle of Seok-go, Hwa-seon, and the lead detective Min-beom. There is an exciting dynamic between each of their interactions as information on the crime is concealed, twisted, and later discovered with dramatic effects. However the main driving force in the film is not centred on whether or not Min-beom will discover the truth or if Hwa-seon will be saved, but rather through constant questions of Seok-go's own murky intentions and capabilities.

Seok-go is framed as a talented, self-motivated maths teacher who cares about his teachings and his students. He is punctual, well-kept, and has impeccable manners. When he's not crippled by his own shyness and introversion, his words are clear, well chosen, and meaningful. He is also a voyeur who has constructed an unhealthy fantasy of love with his neighbour. It's this obsession that (mis)leads him to want to protect Hwa-seon, knowing the potential risks to himself. Despite all the warning signs and creepy cues, Seok-go still glows with a sympathetic light that persists throughout. The notion of Seok-go as a 'compass-less' killer (perhaps without his love for Hwa-seon to correctly steer him) is that awkward elephant in the frame that scratches at the back of our minds the whole time; it drives the viewer crazy and the story forward.

"Suspect X" contains a tightly woven tale that pleases and teases all throughout. The film cleverly plays with the archetypal psychopath and that kept the mystery fresh and frantic. Ryoo Seung-bum definitely showed some star power here, and in support his two co-stars kept up with his excellent performance as the eccentric and calculating, slightly creepy, neighbourhood maths teacher. Pang Eun-jin's adaptation claimed around 1.5M admissions at the Korean box office, perhaps a disappointing take for such a compelling feature with lots on offer.