[HanCinema's Film Review] "Tell Me Something" 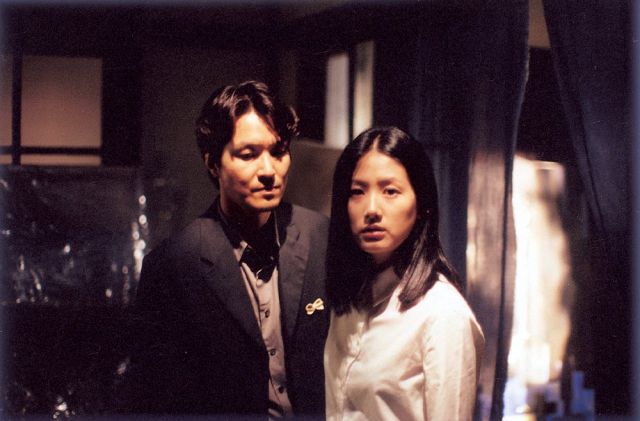 From the very beggining it's clear that "Tell Me Something" is not a film for the squeamish. You see the body on the table and then there's this person with some sort of tool and...oh dear. No, this isn't going to end well at all. It's pretty easy to guess what's in those black bags and no, it's never a good thing when they're inevitably opened. There's blood, body parts, plenty of general dismemberment. Just remembering those scenes makes me feel a little ill.

But rest assured- the film is quite tasteful in its depictions of discomforting bodily horrors. Director Jang Yoon-hyeon clearly went about the production of "Tell Me Something" with an artistic mind. The cinematography is excellent, with careful deliberate slow pans of various rooms and realms of disaster. The music as well marks a constant mix between contemporary and classical, each new setpiece bringing to mind an entirely new bit of unsettling horror all with an elaborate notion of beauty at hand.

Considering the film production in contrast to the serial killer at the center of the story is a worrisome dilemma. In some sense Jang Yoon-hyeon is giving us exactly what we want in terms of spectacle and form. So too, does the serial killer very clearly plot out disgusting scenes in advance, obviously mindful of the fact that people will watch these events, and come away from them with a horrific searing impression that will survive in nightmares indefinitely.

Oh right, the plot. Detective Jo (played by Han Suk-kyu) is on the trail of the killer. It's a Han Suk-kyu performance, so there's definite quality there, the usual specific gestures, well defined intonation, and general sense that he's taking this case way more personally than he should. So, in terms of your boiler plate freaky murder mystery, all the right elements are here for making a tense classy fright fest.

And that's exactly what we get. Nothing more, nothing less. "Tell Me Something" is all about the emphasis of style. From a critical perpsective it's nearly irreproachable on this front. The production is just that meticulous, that much careful attention is paid to the individual objects in scenes, the features in the art, the greater thematic implications of the information we hear and the visions we see. There's a lot here that's ripe for critical analysis, given the emphasis on just looking at stuff.

But now, let's say you're a more casual movie watcher. Will all these deliberately thematic elements and references to classical culture make much of an emotional impact? Probably not. Aside from the style this is, again, just a standard murder mystery. One that's not terribly difficult to predict, really, in terms of plot twists. No, all of the best twists in "Tell Me Something" are mental ones, as Yoon-hyeon forces the viewer to see things tinged with just enough art and horror that a feeling of both beauty and fear are simultaneously invoked. Perhaps that's all your looking for in a detective thriller. If so, this film will satisfy those desires to your heart's content.

"Tell Me Something" is directed by Jang Yoon-hyeon and features Han Suk-kyu and Shim Eun-ha.

"[HanCinema's Film Review] "Tell Me Something""
by HanCinema is licensed under a Creative Commons Attribution-Share Alike 3.0 Unported License.